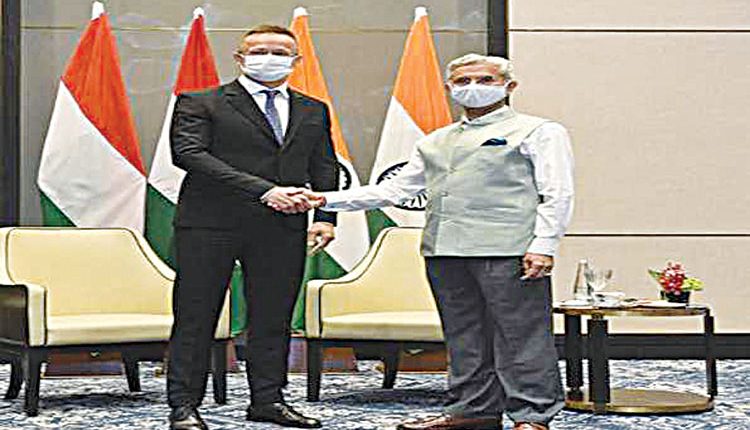 New Delhi, May 27 (FN Bureau) Hungarian Foreign Minister Peter Szijjarto, who is visiting India, on Friday held talks with External Affairs Minister S Jaishankar during which the two sides discussed the Ukraine conflict and its knock-on effects, even as Hungary has been seeing a flood of Ukrainian refugees enter the country and is also striving to keep fuel prices down. EAM Jaishankar also thanked the Hungarian foreign minister for Budapest’s help during Operation Ganga, for the evacuation of Indian students from Ukraine. The Hungarian Foreign Minister also participated in the inauguration of an India-Hungary Business Forum. In tweets, the EAM said: “A warm and insightful discussion with FM Péter Szijjártó of Hungary today. “Appreciated Hungarian support for Operation Ganga and discussed admission of Indian medical students in Hungary. “Recalled Hungary’s early recognition of Covaxin and openness to travel arrangements. “Reviewed further cooperation in S&T, education and cultural relations.

Happy to note growing ties between our businesses. Welcomed Hungary as the newest member of the International Solar Alliance. “Valued the assessment of the Ukraine conflict and its knock-on effects in different domains. Also acknowledged Hungary’s steadfast commitment to an expanded Indian engagement with the European Union. Agreed to strengthen our longstanding cooperation in multilateral forum.” On Tuesday, Hungarian Prime Minister Viktor Orban announced a “state of emergency” to enable his country to take quick decisions in response to security and economic threats posed by the conflict between Russia and Ukraine. India had been in regular contact with Hungary for the evacuation of its nationals, mostly students, from Ukraine after the conflict broke out on February 24 this year. The Hungarian FM was visiting India at the head of a high-level business delegation, at the invitation of EAM S. Jaishankar. An official statement said, “India and Hungary share a warm and historical relationship based on mutual trust and understanding. Our bilateral relations are marked by strong linkages across institutions, academia, culture and people to people ties. The two Ministers, over delegation level talks, discussed the entire gamut of bilateral relations, including political, economic, cultural and people to people ties. EAM thanked the Hungarian government for facilitating the evacuation of more than 6,000 Indian citizens through the Ukraine – Hungary border and for their offer to accommodate evacuated Indian medical students in Hungarian universities.

“The Ministers noted that bilateral trade was approaching US $ 1 billion, and Indian investments in Hungary were increasing across sectors. Both sides also agreed to further explore opportunities in various sectors including water, agriculture, food processing, health and S&T. The Hungarian side also signed the International Solar Alliance Framework Agreement. Both sides also discussed cultural linkages and looked forward to the celebrations of Azadi ka Amrit Mahotsav as well as 75 years of establishment of diplomatic relations in 2023. Both sides also exchanged views on the global economic situation, developments in India-EU relations, Indo-Pacific, Afghanistan, Sri Lanka and Ukraine. An India-Hungary Business Forum, co-chaired by Foreign Minister Szijjártó along with MoS Meenakshi Lekhi was also held today where senior business leaders from both countries participated. Two commercial agreements were signed at the Business Forum. Foreign Minister Szijjártó also met Petroleum and Natural Gas Minister Hardeep Sing Puri and discussed cooperation in the energy sector between the two countries.” MoS Meenakshi Lekhi in a tweet said: “Great pleasure to inaugurate India-Hungary Business Forum with HE Mr. Péter Szijjártó, Minister of Foreign Affairs & Trade of Hungary. Our bilateral trade has seen rapid growth in recent years. This event is a step in realising our full potential in trade & investment & expanding our ties.”