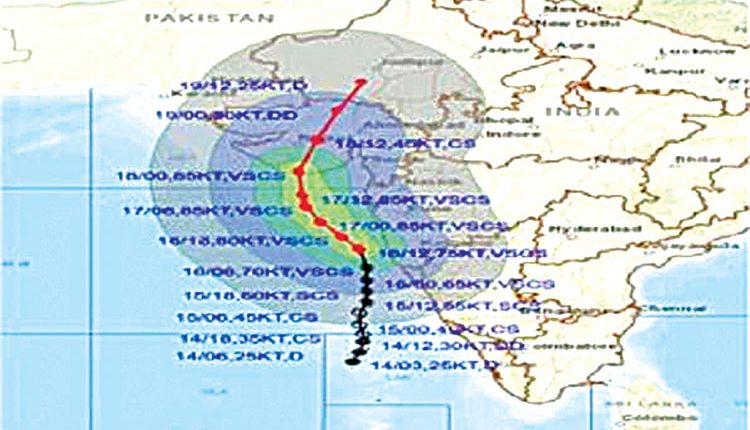 It is very likely to intensify further during next 24 hours. It is very likely to move north-northwestwards and reach Gujarat coast in the evening hours of 17th & cross Gujarat coast between Porbandar & Mahuva (Bhavnagar district) around 18th May early morning, the national weather Department said. The System is being monitored by Doppler weather RADAR Goa. IMD also warned of storm surge of about 2- 3 m above astronomical tide to inundate coastal areas of Morbi, Kutch, Devbhoomi Dwarka & Jamnagar districts and 1-2 meters along Porbandar, Junagarh, Diu, Gir Somnath, Amreli, Bhavnagar and 0.5 to 1m over the remaining coastal districts of Gujarat during 18th May afternoon/ evening around the time of landfall. IMD has been issuing three hourly bulletins since 13th May with latest forecast to all the concerned States.

It is likely to cause heavy rainfall in the coastal districts of Gujarat, including extremely heavy falls in Junagadh and Gir Somnath and heavy to very heavy rainfall at a few places in the districts of Saurashtra Kutch & Diu namely Gir Somnath, Diu, Junagadh, Porbandar, Devbhoomi Dwarka, Amreli, Rajkot, Jamnagar. Union Home Ministry has pre-positioned 42 teams of NDRF which are equipped with boats, tree-cutters, telecom equipments etc. in six States and has kept 26 teams on standby. Indian Coast Guard and the Navy have deployed ships and helicopters for relief, search and rescue operations while Air Force and Engineer task force units of Army, with boats and rescue equipment, are on standby for deployment. Seven ships with Humanitarian Assistance and Disaster Relief Units are on standby along western coast. “Surveillance aircraft and helicopters are carrying out serial surveillance along the western coast. Disaster Relief teams (DRTs) and Medical Teams (MTs) are standby at Trivandrum, Kannur and other locations along western coast” an official in the Government said.