Cyclone YAAS leaves a trail of destruction in Balasore 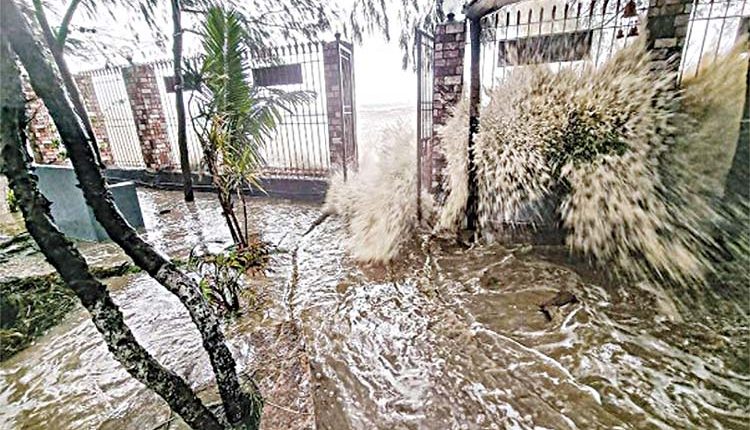 Balasore, May 26 (FN Representative) The cyclone Yass left a trail of devastation when it passed through Bahanaga and part of Balasore town Wednesday morning. One casualty has been reported which is yet to be declared officially. The deceased is identified as Mantu Jena, 22, a resident of Bhaskar Ganj. Reports said that he died as a tree fell on him during the cyclone. The cyclone Yaas has caused massive damages to the seaside villages, crops, vegetables and most importantly the prawn gheris.

A tidal surge triggered out of the cyclone has caused extensive damages as reports said sea tide rose over 12 to 14 feet in the morning around 7 AM and saline water gushed into the plain areas. This phenomenon was experienced in Chandipur, Balramgadi , Naupalgadi, Kaasafal ,Baliapal and Bhograi too. A local resident of Chandipur Vivek Das said the high tide water from sea has entered into all the lodges near the beach and similarly most of the prawn dykes were overfilled with the tidal saline water. The gheri owners are apprehending that there would be a total loss to their crop as the cultured prawn would escape when water would recede.The tidal surge intensity was high due to the full moon impact.

The residential houses in the low lying areas and near to sea coast are too experiencing sea water inundation. The entire district experienced load shedding from last evening which is yet to be restored although the cyclonic storm crossed the coast in the noon In several places the trees were uprooted and severed branches seen lying on the roads causing traffic obstructions. The NDRF,ODRF and Fire Services personnel were found busy in cutting the trees to clear the road communication..Electric wires were severed at many places due to the cyclone. Reports of RCC roofs flying off and collapse of boundary walls too received from several places. Heavy rainfall reported from Khaira, Oupada and Simulia blocks The district administration had evacuated over 1.52 lakh people to safer places.However in most of centers the evacuees had complained of mismanagement