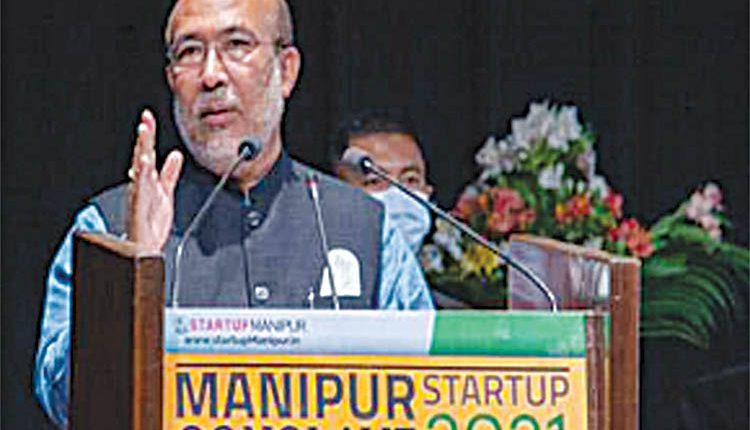 Imphal, Oct 25 (FN Bureau) Chief Minister N. Biren Singh on Monday said that StartUp Manipur Scheme is supporting dynamic youths with promising innovative ideas, and Rs. 114.56 crore has been sanctioned to different beneficiaries of different categories so far. He said 5995 beneficiaries had been shortlisted under the scheme so far, out of which, monetary benefits had been provided to 5477 beneficiaries so far. Mr Biren was speaking as the chief guest at StartUp Conclave, 2021, organised by the State Planning Department at City Convention Centre, Palace Compound today. Stating that Manipur has many talented and hardworking youths, the Chief Minister said that it is a matter of great satisfaction that many products manufactured by different firms benefited under the StartUp Manipur scheme are even being exported now.

The Chief Minister further said that StartUp Manipur had three categories namely Revenue, Idea and Entrepreneurs Support Scheme (ESS) earlier. StandUp Manipur was added in 2019-20 to promote the first time venture of SC/ST/OBC/ women/ Minority/ differently-abled entrepreneurs. This year, Mr Biren Singh added, another sub-category under Idea stage had been included to address the impact of COVID pandemic on existing small business/trade owners. Expressing gratitude to banks for extending co-operation in the successful implementation of the scheme, the chief minister, however, urged them to speed up loan process so that no unnecessary inconvenience is given to applicants.

He urged the people of the State especially talented and hardworking entrepreneurs to take the opportunity of availing benefits under StartUp Manipur for economic prosperity of the State. The Chief Minister announced that ‘Go to Village 2.0’ would commence from November, and it would be implemented alongside ‘Chief Minister’s Health for All’. Deputy Chief Minister Y. Joykumar observed that using the benefits of StartUp Manipur, beneficiaries should develop their business bit by bit to progress to a larger scale. He also expressed hope that such entrepreneurs would definitely contribute to bringing economic prosperity to the State. Works Minister Th. Biswajit, in his speech, said that StartUp would enable Prime Minister , Narendra Modi’s slogan, ‘Vocal for Local’ and make Manipur realize ‘Atmanirbhar’ (self-reliant). With the introduction of StartUp Manipur, the Minister said that there has been constant growth in the number of industries and entrepreneurs in the State. It may be mentioned that this year, under the Idea Stage (COVID economic package) Rs. 1 lakh each having Rs. 30,000 subsidy will be provided to 4500 beneficiaries. This amount may be enhanced up to Rs. 3 lakh according to the performance of the beneficiary. On the other hand, benefits worth Rs. 1.2 crore (Rs. 3 lakh of each beneficiary) will be provided to 40 beneficiaries under Idea Stage (Innovative). Under Revenue Stage, new sanctions will be issued to 72 beneficiaries while 48 benefits have been selected under StandUp.