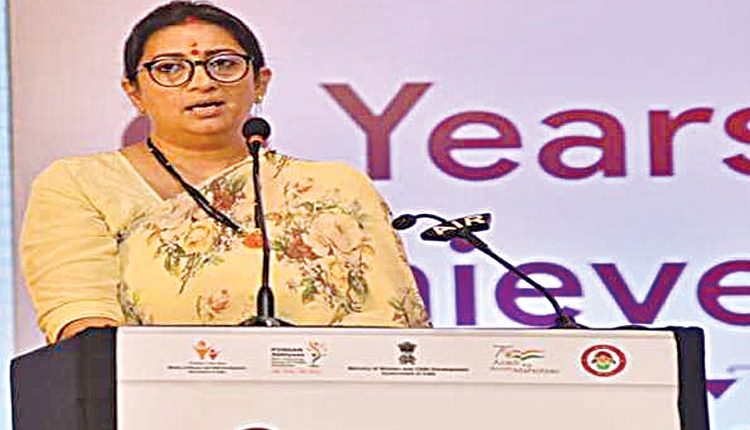 Hyderabad, July 4 (Agency) Union Minister for Women and Child Development Smriti Irani said that the experience shared by the beneficiaries has shown that, policies when implemented in collaboration by the centre and state can bring about positive change in lives of women.Speaking after inaugurating the Zonal Meeting on ‘8 Years’ Achievements – Impact on Women and Children here on Monday, Irani shared that about 36 One Stop Centers (OSC) had been sanctioned for Telangana, out of which 33 are already operational and welcomed fresh proposals from the state to increase the number of OSCs, if required.
Launched in 2015, the One Stop Centers scheme extends help to women facing gender-based violence in terms of medical aid, legal assistance, psychological counseling and temporary shelter, she said.

The minister appreciated the courage of one such beneficiary of Sakhi OSC who shared her experience of overcoming trauma of domestic violence and now has become financially independent by running a small Kirana shop.Irani said that under the leadership of Prime Minister Narendra Modi, intensive effort was put into identifying the children orphaned by the Covid pandemic by the Centre and State government Child Welfare Committees.As a result about 4000 children were given financial assistance under ‘PM CARES’. She lauded the resolve and positivity of beneficiaries who shared their gritty tales of overcoming hardships with the help of various schemes.Smriti Irani shared that 2.7 crore bank accounts under Sukanya Samridhi Yojana (SSY) scheme have been opened so far and over one lakh crore rupees has been deposited in them so far.She also said that over 19000 villages were completely saturated under SSA which is testament to the government’s commitment towards women empowerment.Telangana Tribal Welfare, Women and Child Welfare Satyavati Rathod opined that the combined efforts of the state and central government are yielding good results in terms of women empowerment and improvement in indices of child health in the state.The achievements in the previous eight years in the women and children centric schemes and the new initiatives planned were presented by Secretary WCD Indevar Pandey.