‘Bring good people to power to save democracy & nation’ 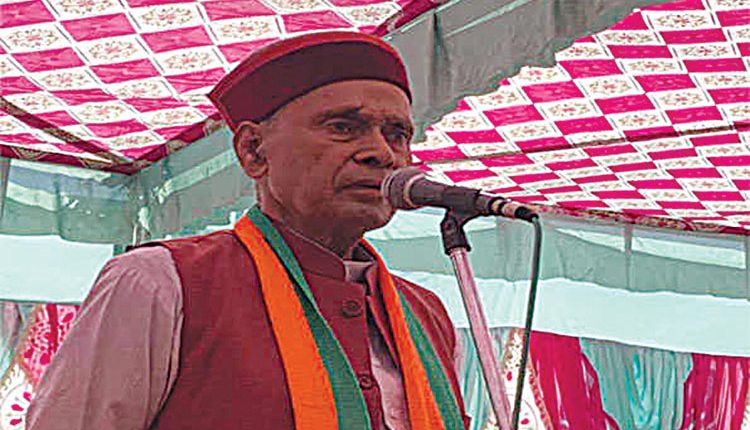 Hamirpur (HP), Oct 30 (FN Agency) Senior BJP leader and former HP Chief Minister, PK Dhumal Sunday exhorted the people to elect good people as their representatives in the coming Vidhan Sabha elections in order to save the democracy and the nation. He said this while addressing a Vijay Sankalp Rally at Lagdevi village of the district on Sunday. On this occasion, he also listened to the Maan Ki Baat program of Prime Minister, Narendra Modi along with the people present in the rally. Dhumal cautioned the people that if they chose the wrong people, they would repent thereafter. He said elections are held every five years and that is the right time for the people to elect their representatives to rule over them.

He said by bringing the right people to power, chances of right development increases. He sought votes in favour of Captain Ranjit Singh, the party candidate for the Sujanpur assembly seat. He said the key to the victory of the candidate is in the hands of the voter. But you have to decide what kind of candidate you want, whether you want a candidate to enhance the development of the area or a candidate who pushes the youth of the area towards intoxication. He said,” It is not hidden from anyone that for the first time a former soldier has been nominated by the BJP from the Sujanpur assembly constituency and it is a matter of luck that there are the maximum number of military families in the area, so the soldier should win”.

He said for the first time since 1966, a captain who is an ex-serviceman has entered the election fray. Every soldier and his family will be witness to the victory of this ex-serviceman, he said we all have seen what happened in 2017, everyone suffers, everyone wants to take revenge for 2017 and now the time has come to take revenge. He said,” If 2017 is to be avenged, then 2022 will have to be won. This soldier has to win; the victory of the soldier will be the victory of the nation and the soldiers”. Speaking on occasion, Captain Ranjit Singh, the party candidate for the Sujanpur seat said his victory would be the victory of right-thinking people in general and the Dhumal family in particular. He said, “In a democratic set up no one wants to leave the chair but here Dhumal Ji has offered his chair to me and that is highly creditable for the Dhumal family. I salute them”.

Determined to bring transparency, accountability and inclusiveness in the governance: LG