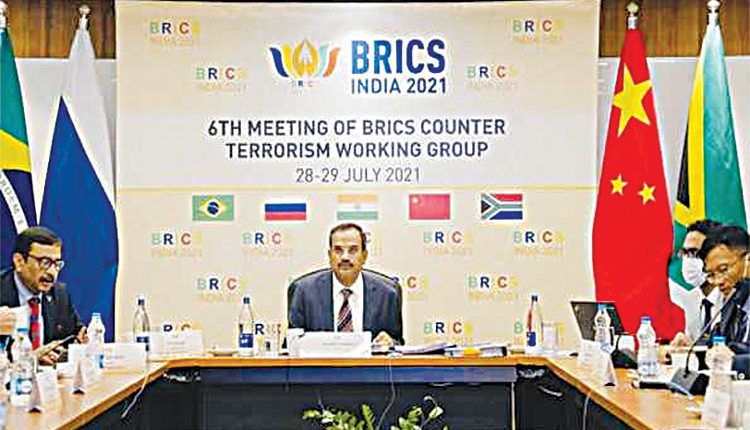 New Delhi, Jul 30 (Agency) The 6th meeting of the BRICS Counter Terrorism Working Group (CTWG) was held virtually on July 28-29 under the chairship of India, and saw the finalisation of the BRICS Counter Terrorism Action Plan that contained specific measures to implement the BRICS Counter Terrorism Strategy adopted by BRICS Leaders in 2020. The Action Plan is aimed at further strengthening result oriented cooperation between BRICS countries in areas such as preventing and combating terrorism, radicalisation, financing of terrorism, misuse of internet by terrorists, curbing travel of terrorists, border control, protection of soft targets, information sharing, capacity building, international and regional cooperation etc, a statement from the Ministry of External Affairs said on Friday.

The BRICS Counter Terrorism Action Plan is one of the key deliverables during India’s Chairship of BRICS and will be adopted at the meeting of BRICS National Security Advisors scheduled next month. Mahaveer Singhvi, Joint Secretary for Counter Terrorism, MEA, chaired the meeting, that was participated by senior counter terrorism officials from all BRICS countries. During the Working Group meeting, while condemning terrorism in all its forms and manifestations whenever, wherever and by whomsoever committed, the BRICS countries also exchanged views on terrorism threat assessment at the national, regional and global level and resolved to further enhance counter terrorism cooperation in line with the Action Plan.

The BRICS Counter Terrorism Working Group meeting was preceded by virtual meetings of the five thematic sub-working groups on Misuse of Internet for Terrorist Purpose, Deradicalization, Countering Terrorist Financing, Capacity Building and Countering Foreign Terrorist Fighters on 26-27 July 2021, the statement added. India assumed the rotating chairship of BRICS (Brazil, Russia, India, China and South Africa) in January this year. It is the third time that India will be hosting the BRICS Summit after 2012 and 2016. The theme for India’s Chairship is ‘BRICS @ 15: Intra-BRICS Cooperation for Continuity, Consolidation and Consensus’, as BRICS celebrates its 15th anniversary this year.