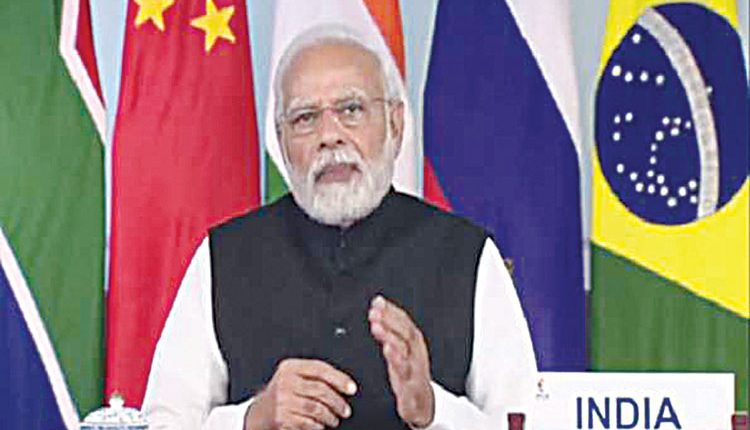 New Delhi, June 23 (Bureau) Prime Minister Narendra Modi on Thursday said that the BRICS nations of Brazil, Russia, India, China and South Africa, have taken many practical steps that make the grouping a unique international organisation, whose focus is not limited to just talk. In his opening remarks at the 14th BRICS summit, hosted by China virtually, Prime Minister Modi thanked all the BRICS nations for holding major International Day of Yoga events in their countries, and especially extended thanks for the cooperation from the countries’ teams. He said that for the third successive year the leaders — Russia’s President Vladimir Putin, Chinese President Xi Jinping, South African President Cyril Ramaphosa, and Brazil’s President Jair Bolsanaro — are meeting in virtual format amid the challenges of the Covid pandemic.

“Though the global effects of the pandemic are less than earlier, but its many damaging after effects can still be seen on the global economy,” the PM said. “BRICS nations share similar views on the global economic situation and that is why our mutual cooperation will be able to contribute in a major way in the global post-Covid recovery,” the PM suggested. “In the last few years we have made quite a few organisational improvements in BRICS, which has helped improve the influence of the grouping. It is also a reason for happiness that the membership of the New Development Bank has increased,” he remarked.
He said there are many sectors through which the BRICS countries have benefited our people directly, like setting up of vaccine R&D centres, cooperation between the customs departments, setting up of shared satellite constellation, mutual recognition of pharma products, etc “These kinds of practical steps have made BRICS a unique international organisation, whose focus is not limited to just talk,” the PM said. “We have strengthened the engagement between the BRICS youth summits, sports, our civil society organisations, think tanks and our people to people connect,” he said and voiced confidence that the deliberations today would throw up suggestions to further strengthen the relations between the BRICS countries.