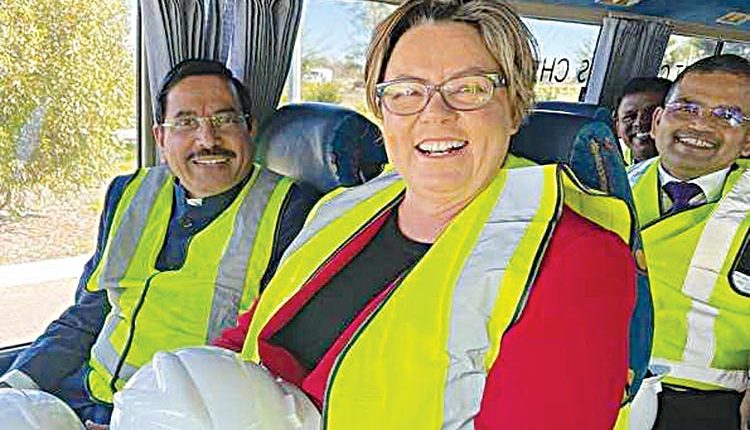 New Delhi, July 4 (Mayank Nigam) Australia and India have strengthened cooperation on development of critical minerals projects and supply chains following a meeting between Resources and Northern Australia Minister Madeleine King and her Indian counterpart Minister for Parliamentary Affairs, Coal and Mines Pralhad Joshi.At their first meeting since the election of the Albanese Government, Minister King confirmed Australia would commit A$5.8 million to the three-year India-Australia Critical Minerals Investment Partnership, an official statement said on Monday.Following talks with Joshi, King said Australia and India were natural partners on critical minerals and the two countries shared a commitment to lowering emissions and boosting the use of renewable energy.“Australia is a trusted supplier of resources and energy to India, and we can build on the success of those established supply chains as Australia’s critical minerals sector grows,” King said.

“Australia has the resources to help India fulfil its ambitions to lower emissions and meet growing demand for critical minerals to help India’s space and defence industries, and the manufacture of solar panels, batteries and electric vehicles. Australia welcomes India’s strong interest and support for a bilateral partnership which will help advance critical minerals projects in Australia while diversifying global supply chains,” the minister said.Joshi said, “We have recently signed an MoU between Khanij Bidesh India Ltd, and the Critical Minerals Facilitation Office (CMFO), Australia, which aims to ensure reliable supplies of Critical and Strategic Minerals to India.’The MoU includes joint due diligence in Lithium and Cobalt mineral assets of Australia. Both CMFO and the Indian JV KABIL will jointly fund the due diligence process with an initial total amount of US$6 million.Once the due diligence is completed and potential projects are identified, we will explore investment opportunities through different methods as envisaged in the MoU.“India and Australia are natural partners. Not only are both the nations rich in minerals, but our trade relations have witnessed robust growth in recent years, which can be leveraged for strengthening the economies of both countries.

Our Prime Minister is committed to take India-Australia relationship to new heights,’ he said.“India is among the fastest growing economies in the world and there is huge scope for collaboration in the mineral sector. Technology transfer, knowledge-sharing and investment in critical minerals like lithium and cobalt are strategic to achieving clean energy ambitions. The future looks promising for India and Australia.” Joshi said.Australia hosts vast reserves of critical minerals, such as lithium and cobalt, which are crucial for clean energy technologies such as batteries and electric vehicles, as well as mobile phones and computers.Following the talks, Minister King and Minister Joshi toured the Tianqi Lithium Refinery at Kwinana in Minister King’s electorate of Brand.Joshi’s visit comes as the latest quarterly snapshot of Australia’s resources and energy forecasts ongoing strong demand for lithium and other critical minerals on the back of growing global demand for electric vehicles.The June 2022 Resources and Energy Quarterly publication by the Department of Industry, Science and Resources, projects the value of Australia’s lithium exports will double from $4.1 billion in 2021-22 to $9.4 billion in 2023-24.

Lithium exports were worth only $1.1 billion in 2020-21.“Australia is the world’s largest exporter of lithium and export opportunities are forecast to keep growing as global demand continues for electric vehicles and clean energy technology, and as more projects and refineries come on line in Australia,” King said.“Australia has a reputation as a stable and reliable supplier of resources and energy, and Australian critical minerals will help both Australian and international partners to decarbonise their economies and lower emissions,” the minister said.The Albanese Government has a long-standing commitment to building a stronger relationship with India. The Government has committed to an update of the 2018 India Economic Strategy, an annual India-Australia Economic Dialogue, and developing Indian language capabilities in Australia, she said.