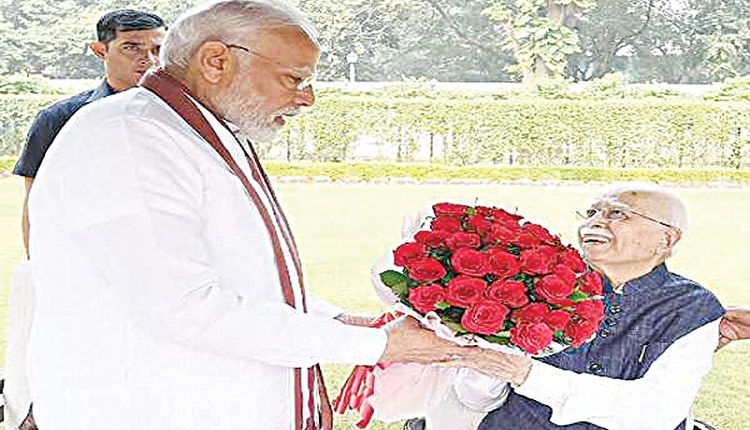 New Delhi, Nov 8 (FN Agency) Prime Minister Narendra Modi visited the home of BJP stalwart Lal Krishna Advani on Tuesday to greet the veteran leader on his 95th birthday and said that his contribution to India’s growth is monumental. “Went to Advani Ji’s residence and wished him on his birthday. His contribution to India’s growth is monumental. He is respected all across India for his vision and intellect. His role in building and strengthening the BJP is unparalleled. I pray for his long and healthy life,” the Prime Minister wrote on Twitter after the visit. Defence Minister Rajnath Singh also visited Advani and wished him a good health and long life. “I went to the residence of respected Advaniji and wished him a very happy birthday.

Carrying forward this commitment, PM Narendra Modi ji has also taken several steps to bring transparency in governance,” said Finance Minister Nirmala Sitharaman in a tweet. Lal Krishna Advani was born in 1927 in Karachi. He joined the Rashtriya Swayamsevak Sangh (RSS) at a young age and displayed remarkable organisational skills. He was a founding member of the Bharatiya Janata Party in 1980 and remained its prominent face along with former prime minister Atal Bihari Vajpayee for decades. The Rath Yatra in 1990s in support of the Ram temple in Ayodhya is widely considered as the principle reason for emergence of right wing politics in the country.

Guru Nanak’s teachings beacon of light to the world: PM