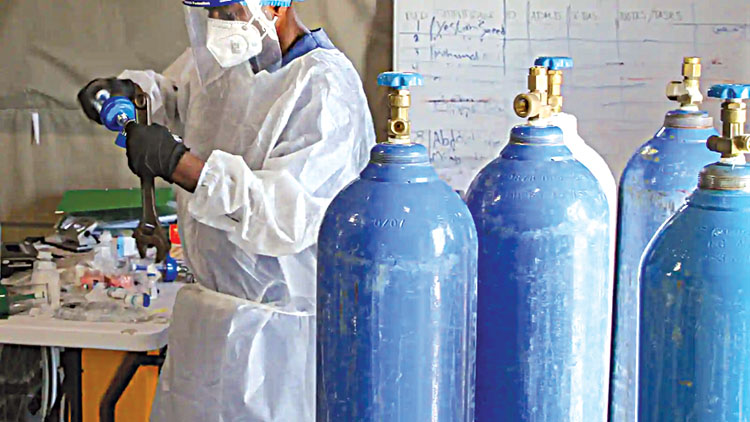 New Delhi, Jun 25 (FN Bureau) Delhi Deputy Chief Minister Manish Sisodia on Friday condemned the BJP for fabricating lies by means of an alleged report, to falsely claim that the AAP government in Delhi inflated its oxygen requirement. Addressing a press conference, Mr Sisodia said, ”BJP, based on an alleged report on oxygen supply has been vilifying and attacking Chief Minister Arvind Kejriwal.” ”Many big leaders, ministers, volunteers of BJP since morning are rallying together on all social media platforms, maligning Chief Minister Kejriwal on the oxygen management in Delhi,” Mr Sisodia said. He said this alleged report brought forth by BJP to falsely condemn Delhi’s management of oxygen claims that there was no shortage of oxygen during 2nd COVID peak and that Delhi Government ‘inflated oxygen need by 4 times’.

”However, the real truth about this report is that it does not exist,” he said. ”This alleged report which is being used by BJP leaders to senselessly slam CM Kejriwal does not exist. It is bogus and misleading. The Bhartiya Janata Party is lying and shirking accountability,” Mr Sisodia said. Mr Sisodia said, “The Supreme Court had assembled an Oxygen Audit Committee, in lieu of the prevailing oxygen crisis during 2nd COVID wave. Upon speaking to members of this Oxygen Audit Committee, the truth came into light. Members of this committee have informed the Delhi Government that no such report has been approved, signed or released. When no such report has been approved by the Oxygen Audit Committee, then which report is being used by BJP to yet again malign the Delhi Government?

On Oxygen row, Delhi Chief Minister Arvind Kejriwal in a tweet in Hindi said, ”My crime – I fought for the lives of 2 crore people of Delhi. When you were doing repeated election rallies, I was awake all night arranging for Oxygen. I fought, pleaded for people to get me oxygen. People have lost their loved ones due to the lack of oxygen. You shouldn’t call them liars, they will feel really bad about it.” Earlier in the day, while addressing a press conference, BJP spokesperson Sambit Patra said the Supreme Court had constituted a panel to audit oxygen in Delhi. ”According to the report of that panel, the requirement of oxygen was increased by four times by the Delhi government,” the BJP spokesperson said. ”Due to this lie of Arvind Kejriwal, 12 states of the country were affected,” he said.