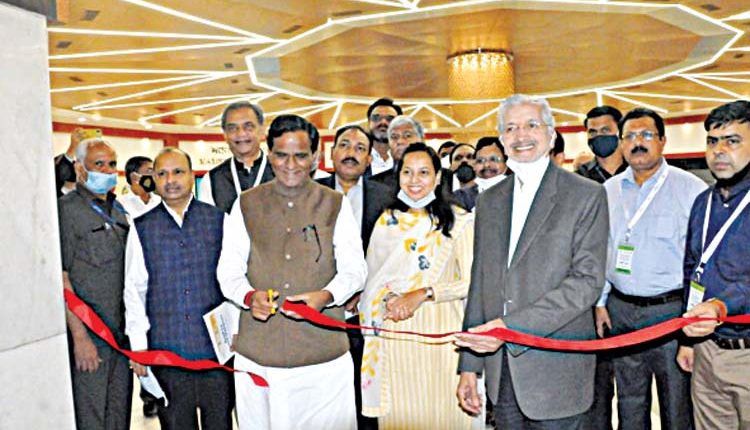 Mumbai, Sep 21 (FN Agency) Maharashtra State Minister for Industries and Mining Subhash Desai inaugurated Vanijya Utsav Export Conclave in the presence of Union Minister for State for Railways, Coal and Mines Raosaheb Danve and Maharashtra Minister of State for Industries and Mining Aditi Tatkare at the World Trade Center, Mumbai, on Tuesday. The two-day event is being organised by Directorate General of Foreign Trade, Ministry of Commerce and Industry and Industries Department, Government of Maharashtra in collaboration with Gems and Jewellery Export Promotion Council (GJEPC). The theme of the two-day conclave is ‘Showcasing India as a Rising Economic Force’ and will have panel discussions on various topics. The first day will discuss State and Central Government support for export promotion, Maharashtra – as an export hub, importance of Ports and Logistics in exports, Banking & Finance support for export promotion, bilateral trade opportunities for boosting exports. Day two will explore export opportunities in food sector, engineering industries, textile, leather, chemicals and pharmaceutical, gems, jewellery and handicrafts. The conclave is being organized in accordance with the Azadi Ka Amrit Mahotsav events to commemorate the 75th Anniversary of Indian Independence.

Department of Commerce has organised ‘Vanijya Saptah’ from September 20 to 26, 2021, with a focus on economic growth and promotion of exports from India. In his inaugural address, Mr Danve spoke about Aatma Nirbhar Bharat initiative and the efforts to be made to boost exports as well as reduce import dependence. “The Prime Minister is making extraordinary efforts to make India an economic superpower. I am happy to note that under his leadership, India has become the world’s fifth largest among world economies. Our aim is to transform India into a 5 trillion dollar economy. The Aatma Nirbhar Bharat initiative has been launched with this goal. Under this, we need to maximize our exports and reduce import dependence.” The minister also mentioned that an export target of $400 Billion has been set for the FY 2021-22. While Speaking about the state’s share in national exports, he said the Maharashtra’s share in national exports need to be raised from the current level of 20 per cent.

“We need to strengthen Special Economic Zones (SEZ) and Micro, Small and Medium Enterprises (MSME) sector, which have an important role in export promotion. This will not only strengthen our economy, but will also create jobs and strengthen our social sectors. The central government has been bringing in reforms in sectors such as banking, agriculture, labour and social sectors, which has been well-appreciated by the industry. Our GDP has grown by 20% in the first quarter of FY 2021-22, this is a good sign, a feat we achieved during the pandemic.” He said, ”All of us need to work together to realize the dream of Aatma Nirbhar Bharat.” Maharashtra State Minister of Industries and Mining Subhash Desai said, “Maharashtra has a significant role and share in the nation’s GDP as well as exports. Also Maharashtra will be at the forefront in increasing the nation’s exports in future as well.”

Minister of State for Industries and Mining Aditi Tatkare said, “The Conclave will help to promote and boost exports in Maharashtra to a different level. Maharashtra has played a pioneering role when it comes to small, medium, large industrial sectors. This conclave will help us bring together fisheries, agriculture and textile along with other industries and also help to promote exports in respective fields. “ The Conclave aims to bring together all the relevant stakeholders under a single roof to highlight the progress made in exports from Maharashtra, showcase export potential, hold panel discussions and focus on strategies to improve export scenario from the state.