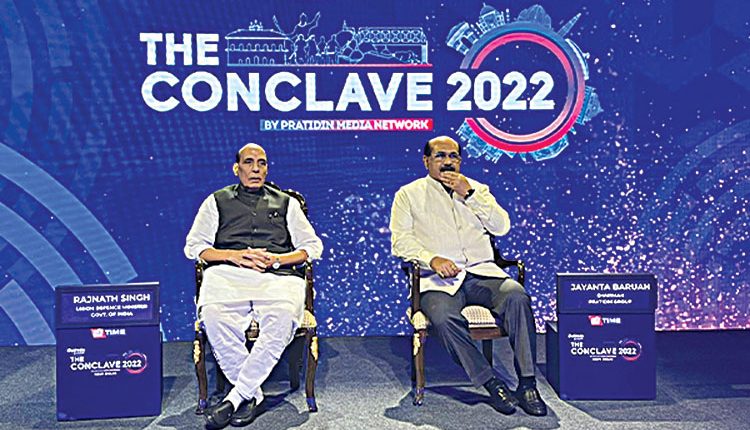 Union minister for defence Shri Rajnath Singh on Saturday inaugurated the two-day Conclave event at Manekshaw Centre, Delhi Cantonment, New Delhi. The Conclave 2022 was hosted by Pratidin Media Network of Assam. It was organized with the aim of taking the issues of Assam and Northeast India and having meaningful discussions on them in the power corridors of the national capital. Pratidin Media Group Chairman Shri Jayanta Baruah felicitated the Union defence minister. He addressed the gathering and welcomed everyone to the conclave. Jayanta Baruah welcomed Rajnath Singh and thanked him for coming. Rajnath Singh said, The Northeast was left isolated from the entire nation in terms of development, and this is not in the best interest of the country. During our reign in power, the insurgency has been brought under control, and the law-and-order situation in the region has improved a lot.

The fifth and final session of day one was on Brahmaputra, alternative transport a reality, in the backdrop of Act East Policy with Union minister Shri Sarbananda Sonowal in a one-on-one discussion with Pratidin Time journalist Nayan Pratim Kumar. During the discussions, Sonowal made several important announcements. He announced the construction of a new shipway for ship repairing works at Pandu in Guwahati while batting several other issues. On the second day, Delhi Police Spl Commissioner Robin Hibu had a one-on-one with Pratidin Time Joint-Editor Sunit Kumar Bhuyan on How to tackle racism and problems faced by people of northeast. Hibu said that initiatives have to be taken from both sides to embrace each others culture. Sunit Bhuyan continued with the next session on drugs, terrorism, geopolitics, and Northeast India with panelists including GOC in C of Eastern Command Lt Gen Rana Pratap Kalita, Assam Police Spl DGP GP Singh, Cyber Security Expert Subimal Bhattacharjee and author Sanjay Hazarika. Thereafter, Maini Mahanta returned for the third session on womens health, malnutrition and heart care of Assam with social activist Monisha Behal, UNICEF state head Madhulika Jonathan and Pratiksha Hospital Chairman Pramod Sharma. The fourth session on sports infrastructure and the potential of Northeast and are they marching together? had CWG Gold winner Nayanmoni Saikia, SAI Guwahati Director Satish K Sarhadi, Asomiya Pratidin Sports Editor Bidyut Kalita and Manipur Youth Affairs and Sports Asst Director Laishangbam Anita Chanu.

The final discourse of the day was moderated by the director of Pratidin Media network, Rishi Baruah, with the panel of Principal Secretary to Assam CM Samir Sinha, Sapient Wealth Advisors Director Pallav Bagaria, Centre Point Group Enterprise MD Larsing Sawyan and Dalmia Cements MD, CEO Mahendra Singhi. During the session, Mr Singhi announced the plans to invest in two more cement manufacturing units in Assams Umrangso and Lanka. For the closing ceremony of the event, Nitumoni Saikia was joined by internationally acclaimed actor Adil Hussain. He talked about his life and shared several interesting stories. Hussain said, I generally dont glorify the word struggle because I did not see my journey as one. I felt strongly in my heart that I am in love with acting. At the end of it, Smitakshi B Goswami delivered the vote of thanks and concluded the two-day The Conclave 2022.

About Pratidin Media Network
Pratidin Media Network, owned by Jayanata Baruah, is the biggest media conglomerate from Assam, publishing the highest circulated newspaper of the state, Asomiya Pratidin and satellite news channel, Pratidin Time, amongst other periodicals and digital media properties. The sister publications from the house include Nandini Magazine, one of the most highly circulated womens magazines in the state, apart from Satsori, which caters to the youth and the weekly publication Sadin. In addition, the digital editions of Asomiya Pratidin and Pratidin Time also catering to both English and Assamese audiences.