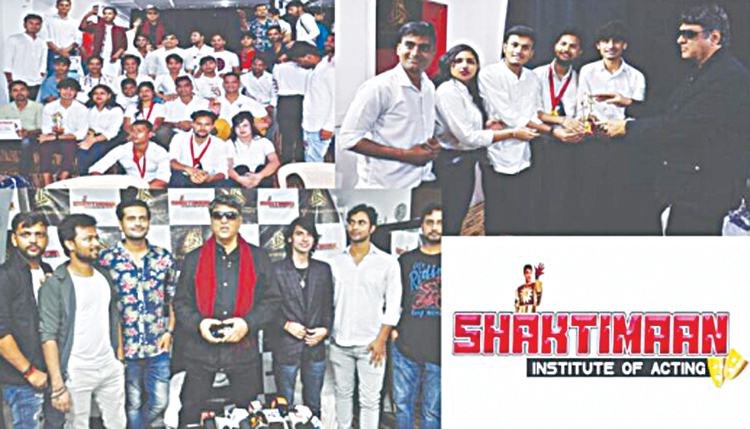 Mumbai happens to hold the glitz and glamour of the entertainment industry. Mukesh Khanna has set up our teaching facility in the midst of all the opportunities for the wannabe actors. Aspiring actors need a platform to hone their skills and talent to measure up to industry standards. Shaktimaan Acting Institute provides that conducive space for actors who can get mentored by the industry’s best. The institute was started by the original Shaktimaan himself, who has been part of the acting industry for several decades. His desire to nurture some of the best talents in the country has made him set up this acting institute. It is one of the best institutes in the region, with world-class training imparted by mentors with years of experience and training to impart the proper acting knowledge and its nuances to the students.

The Shaktimaan Institute, managed by AK Aryan, Joint MD Shreya Rai, Marketing Partner Rahul Varun (He is Bollywood journalist) & Suraj Roy, supported by Jeetendra Singh and Prem Sinha. A lot of who ensure the smooth functioning of the institute. This institute has a wide range of acting and writing courses that are scientifically designed, keeping in mind the evolving nature of the art. The course has both modern methodologies and effective techniques of every era to bring out the best in the actor. Every lesson helps in the enhancement of the performance. The guest lectures from celebrity actors Punit Issar, Gufi Paintal, Surendra Pal, Banwari Lal Jhol, and others hold promise to bring out the performer in aspiring actors and shed light on their qualities to becoming the next star.

Alumni from Shaktimaan Institute of Acting
Shaktimaan acting Institute has provided some fantastic actors from their alumni batch who perform in well-known series and movies on national television and silver screen. Several of them have already debuted and made quite a stir with their performances, like Jeetendra Singh, who has featured in Parusharam in the serial Shani Dev broadcast on the Atrangi TV channel and Kabhi Kabhi Itefaq Se along with Kalpana Premshankar for star plus channel. She also had a chance to be in a well-known brand print shoot. Another brilliant past student has landed the role in Naagin 6 on colors and Parusharam. Producers have found Nadeem Ahmad got him to feature in Lovepanti as Bablu Tiwari on Azaad TV and MX Player. He also plays Radhe in the Jai Bharti serial on Doordarshan. And one of their students has bagged a role in an Awadhi movie with well-known actor Raj Yadav. He is getting an opportunity to play the second lead. He also has two upcoming movies. A web series is also on the horizon based on the crime world wherein he will play the role of a cop. He also had a chance to play Ravan in the Parushram serial. With so many bright starts coming from Shaktimaan institute, which has polished the talents of these young stars who will now contribute to the tinsel world.

New Batch Starting Soon
Admissions for the new batch have already begun with exciting offers on fees and courses. The candidates can avail of a discount upto 50% & take admission in just 96,000/- for the 1,50,000/- course fee. Shaktimaan acting institute is providing a four-month diploma that will include training from the trainers from FTI and NSD. The course includes dance training by an in-house choreographer Ravi Mod, action choreography training and even a guarantee of placement in web series, mini-series, or serials. The institution also ensures that the aspiring actor will continue to get three-year guidance and audition update so aspiring actors can lean back on institute during the struggling phase that every actor must go through like any professional.

Advantage of Institute
The institute has state-of-the-art facilities to facilitate every aspect of acting and writing courses, including theatre studios for students to practice their craft. Regular interactive guest lectures from celebrities are one of the highlights of the course. The center is easily accessible by public transportation, enabling the students to use the high-end facilities of books and movies for both study and research. The studios are enabled with modern facilities such as audio-visual equipment that help for either performance playbacks or movie screenings. The studios also host classes and rehearsals for performances.