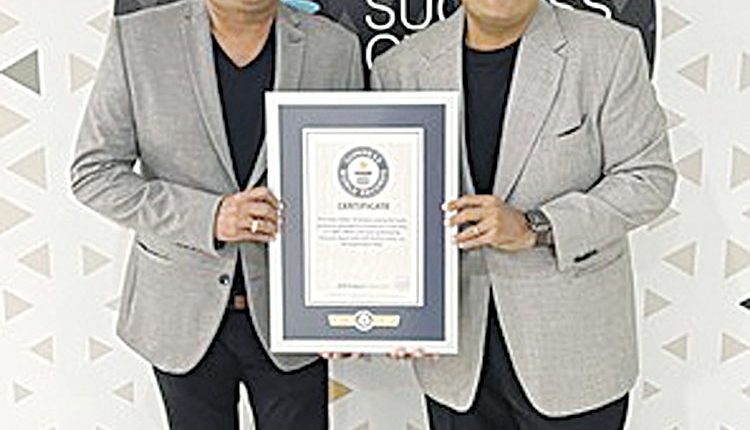 In a world record-setting breakthrough, Success Gyan — India’s leading platform for personal and professional development — has achieved the prestigious Guinness World Records® title for ‘the most number of people saying the same sentence uploaded to Instagram in one hour’, wherein 1,693 coaches and trainers from across India took to Instagram to pledge to make India the training capital of the world, on Teacher’s Day (September 5) 2022. As a tribute to one’s teachers and gurus, Success Gyan had invited participants to participate by stating and joining in its mission of reviving India as a knowledge hub and making it the training capital of the world. Participants were asked to post their videos at 10 AM sharp on September 5, 2022. Surendran J, Founder and CEO, Success Gyan, said, “India was and still is the greatest wisdom hub across the globe. At Success Gyan, we have picked up the mantle to make India the superpower it deserves to be. Supported by our buzzing coaches and trainers’ community, we are thrilled to have succeeded in our official attempt for a Guinness World Records title on Teacher’s Day. We dedicate it to all the selfless teachers and trainers in India.”

“We were overwhelmed by the number of participants who took part and joined us in creating this record. We express our sincere and heartfelt gratitude to each one of the thousands of people for being part of this movement and creating a ripple effect via each post for the #SuccessGyan WorldRecordAttempt. It is a big moment for India and for Success Gyan,” Surendran J added. Guinness World Records® were started in 1955 and is a reference book published annually, listing world records both of human achievements and the extremes of the natural world. In its 10 years of operations, Success Gyan has touched 1 million+ lives with 1000+ offline and online events with some of the world’s best trainers including Nick Vujicic, Anthony Robbins, Robert Kiyosaki, T Harv Eker, and Brian Tracy.

The record goes a long way toward achieving the organization’s mission of taking life-transforming world-class education to every household in the country. Success Gyan’s Super 1000 from its Super Speaker Season 2 contest were among those who posted its powerful mission statement on Instagram. Super Speaker is India’s 1st reality show to find the best speaker in the country and its Super 1000 have been shortlisted for Round 2 from over 2 lakh registrations. India’s top coaches including Siddharth Rajsekar, Puja Puneet, Rajiv Talreja, MV Priyank, Sawan Kapoor, Gaurav Gurbaxani, Warun Mehta, Meghna Dikshit, Prachi Mayekar, Chinha Raheja also participated in this world record. Over the 10 years of its operation, the platform has contributed greatly to people’s development in all domains like personal development, business acceleration, career upgradation and financial management. Success Gyan’s coaches are on a mission to inspire, educate and empower every individual to become the best version of themselves in every area of their life through life transforming education.

About Success Gyan
Launched in 2012, Success Gyan is one of India’s leading platforms for personal and professional development that was built with an aim to inspire, educate and empower people to become better versions of themselves in every area of their lives through life-transforming world-class education. It has hosted over 2000 online and offline events and has brought the world’s top 75 speakers to inspire the Indian audience.

Demand from travellers surges ahead of Diwali