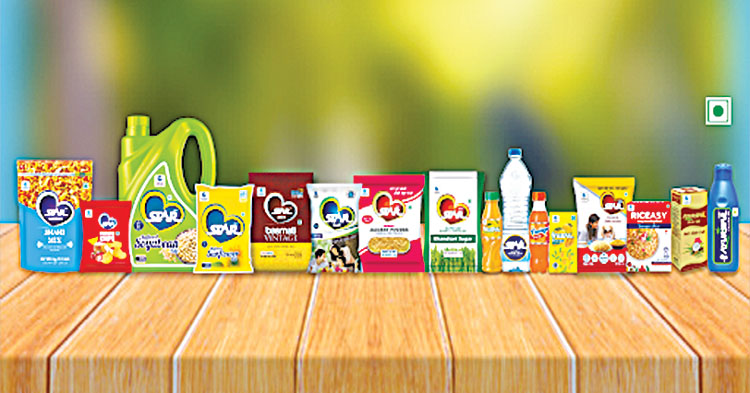 One of the fastest-growing FMCG enterprises in India, Ghodawat Consumer (GCPL), part of well diversified Sanjay Ghodawat Group (SGG), recently touched a momentous milestone. The company while riding on the success and widespread popularity of its wide range of daily consumable products has now become a 1,000 Cr revenue company in financial year ending March 2021.

Ghodawat Consumer (GCPL)
Being launched in 2014 to offer high-quality consumable products at affordable prices, GCPL has seen a gigantic rise in very little time under the guidance and mentoring of Mr. Sanjay D. Ghodawat, Chairman, SGG and leadership of Mr. Shrenik Ghodawat, MD – GCPL. Since its inception, the company has worked extensively on product innovation and customer-centricity that helped it shine its name at the Pan-India level and earned the trust of countless households across India. Currently the major focus of the company is in the western and southern regions and is planning to scale up its distribution network across India in next few quarters.

A Rare Feat
FMCG industry is considered as one of the most competitive business verticals in the world where there is always cut-throat competition amongst peers. This industry demands constant product innovation, better durability, affordability, and quality to sustain in the market. Ghodawat Consumer is one such company that has shown enormous resilience even during the volatile market and economic conditions and proved its mettle through its quality offerings. Today, it has attained a position of affluence by entering into a prestigious 1,000 Cr club where only rare successful enterprises reach. While speaking with its Managing Director Mr. Shrenik Ghodawat, he said, “It is a moment of pride for the entire SGG as GCPL touched this momentous feat. But this is just a milestone in our journey, as we have to go a long way ahead. I am confident that our ultimate aim of making GCPL as one of the best consumer products companies in India will also become a reality soon. I express my gratitude to all stakeholders, whose diligent efforts helped us reach here.”

Inspiring Journey
SGG has been a pioneer in delivering what people desire through its numerous offerings from time to time. What started as just an Edible Oil business in 2014 has now transpired into Atta, Rice, Sugar, Salt, Jaggery, Pulses, Snacks, Namkeen, Beverages, Dairy, Personal and Home Care product categories. Under its popular brand identity ‘Star’ for food products segment and ‘Ayurstar’ and ‘Klemax’ for the non-food product category, the company launched several products in the said categories and expanded not just its product portfolio but also business territory from Maharashtra to Karnataka initially and now at pan-India level with its General Trade, E-Commerce and Modern Trade operations. While continuing on its endeavour of enhancing the lives of people with its quality products, GCPL revamped its business strategy and expanded the reach of its product availability over the period of time. Today, its products are available for sale in thousands of Kirana stores (General Trade), several Modern Trade channels like DMart, Reliance Retail, Metro Cash & Carry and also on popular e-commerce channels like Amazon and Flipkart. Millions across the globe today trust and use products made by Ghodawat Consumer.

About Sanjay Ghodawat Group
Sanjay Ghodawat Group is a prominent Indian business conglomerate that has its presence in various high-value business verticals. Aviation, Consumer Products, Education, Energy, Mining, Realty, Retail, Software and Textiles are some of its key business domains. SGG was incepted in 1993 and since then it has witnessed impressive growth under the splendid stewardship of its Founder and Chairman – Mr. Sanjay Ghodawat. With a strong base of millions of customers across India, SGG is moving ahead with great vigour and bringing significant changes in people’s lives with its wide range of high-quality products and services.

■ Monster Employment Index
Online hiring demand exceeds in 10 of the 27 industries (Apr’21 vs. 20)

The Story of Skin Glows With Inspiration and Success

Cochlear Foundation to remove hearing loss as a barrier to education