US in talks with Pakistan over terrorist safe havens 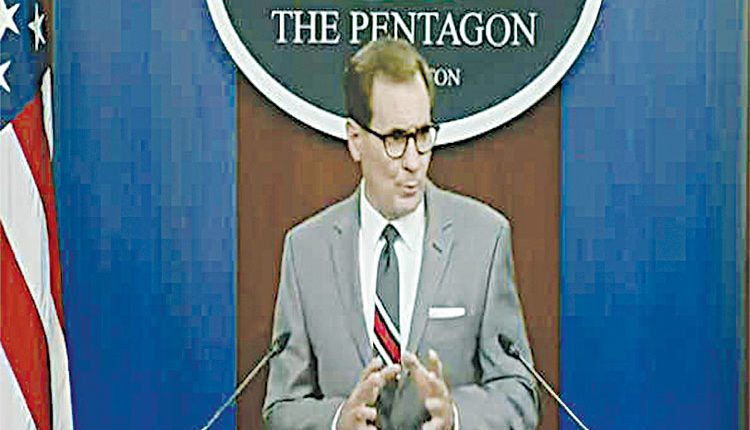 “And we’re not bashful about having that discussion with Pakistani leaders. We’re also mindful that Pakistan and the Pakistani people also are — fall victim to terrorist activities that emanate from that same region” he said. “So, we’re all — we all have a shared sense of — of the importance of closing down those safe havens and — and not allowing them to be used by the Taliban or other insurgent networks to sow discord. And again, we’re having that conversation with the Pakistanis all the time,” he added. On support for the Afghan government forces, he said the US is “continuing to support them — and I assume you’re asking about airstrikes, I’m guessing? Because we are helping Afghan forces in a myriad of other ways.” “But I’m assuming that’s your question. And as I said, nothing has changed about the fact that we have the authorities to do it throughout the drawdown,” he noted.

“We have some capability to do it from obviously over the horizon, and the strikes that we have taken have all been from over the horizon. And we’ll continue to use those capabilities where and when feasible,” he stated. “It’s not always going to be feasible in every case. And the Taliban has been making advances; there’s no question. The Afghans have capacity; they have capability, they have a capable Air Force,” Kirby added. “And as I said, weeks ago, I think, whatever the outcome here, when we look back, we’re going to be able to know, we’re going to be able to say, that it was driven by leadership, Afghan leadership, political and military leadership, that’s what’s vital here,” he said. “We want all neighboring countries, all neighboring countries, to — to not take actions that make the situation in Afghanistan more dangerous than it is already, and to continue to try to use international pressure to get a negotiated peaceful political settlement to this war,” said Kirby.

The Pentagon press secretary’s statement on Pakistan comes days after Afghanistan’s Ambassador to the UN Ghulam M. Isaczai, while speaking at the UN Security Council, had pointed directly at Pakistan for providing the Taliban safe havens and supply of logistics. Isaczai, in Friday’s briefing on Afghanistan at the UN Security Council, under the presidency of India, spoke about the dire situation in Afghanistan due to the Taliban onslaught. He said the fighting “is not a civil war but a war of criminalized and terrorist networks fought on the back of Afghans”. Pointing the blame squarely at Pakistan, he said: “Importantly, the Taliban continue to enjoy a safe haven in and supply and logistics line extended to their war machine from Pakistan. “Graphic reports and videos of Taliban fighters congregating close to the Durand Line to enter Afghanistan, fund-raising events, transfer of dead bodies for mass burial, and treatment of injured Taliban in Pakistani hospitals are emerging and are widely available.”