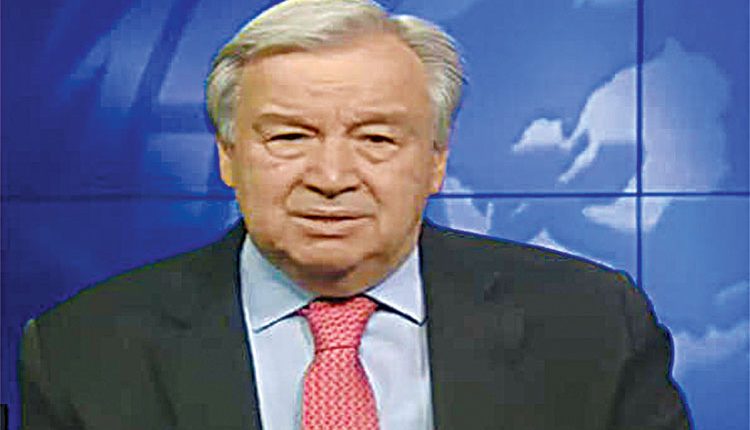 United Nations, May 21 (FN Agency) UN Secretary-General Antonio Guterres has welcomed the ceasefire between Gaza and Israel after 11 days of conflagration in which 232 Palestinians and 12 Israelis were killed and said leaders of both the sides have a responsibility beyond the restoration of calm, to start a serious dialogue to address the root causes of the conflict. Israel and Hamas agreed to a truce on Thursday, ending the 11 days of deadly hostilities.

“I welcome the ceasefire between Gaza and Israel, after 11 days of deadly hostilities,” Mr Guterres said, extending his deepest condolences to all the victims of the violence, and their loved ones. According to latest news reports, at least 232 Palestinians, including more than 60 children have been killed since violence erupted. “I commend Egypt and Qatar for the efforts carried out, in close coordination with the UN, to help restore calm to Gaza and Israel,” the UN official website quoted its chief as saying. He called all sides to observe the ceasefire.

Mr Guterres said it was essential for the wider international community to work with the UN, to develop ‘an integrated, robust package of support for a swift, sustainable reconstruction and recovery, that supports the Palestinian people and strengthens their institutions’. He stressed that leaders in Israel and Palestine had a responsibility ‘beyond the restoration of calm, to start a serious dialogue to address the root causes of the conflict’. He described Gaza as an ‘integral part of the future Palestinian State’, saying no effort should be spared to bring about ‘real national reconciliation that ends the division’. Mr Guterres underscored the UN’s ‘deep commitment” to working with Israelis and Palestinians, and with all international and regional partners, including through the Middle East Quartet, “to return to the path of meaningful negotiations to end the occupation and allow for the realization of a two-State solution on the basis of the 1967 lines, UN resolutions, international law and mutual agreements.”

On being asked what he thought the next step should be, he said that stabilizing the ceasefire was the immediate priority. Besides, UK, EU Commission Russia and other counties have welcomed the truce. “I welcome news of a ceasefire in Israel and Gaza. Leaders in the region must now work to find a durable solution to the Israeli-Palestinian conflict that prevents terrorism, ends the cycle of violence and delivers a sustainable and just peace,” Boris Johnson wrote on Twitter. Moscow notes with deep satisfaction that on May 21, at 2 am, the ceasefire in the zone of the Palestinian-Israeli conflict entered into force, Russia’s foreign ministry said. According to Russian news agency Sputnik, Israel and Palestine spent a first calm night since tensions broke out between the two sides. On Thursday, the Israeli security cabinet unanimously adopted Egypt’s initiative for a bilateral unconditional truce, which took effect at 23:00 GMT on Thursday following 11 days of rocket attacks and airstrikes from both the sides. Hamas has also agreed to abide by the truce.

A small ball that moved the world: 50 years of Ping Pong Diplomacy