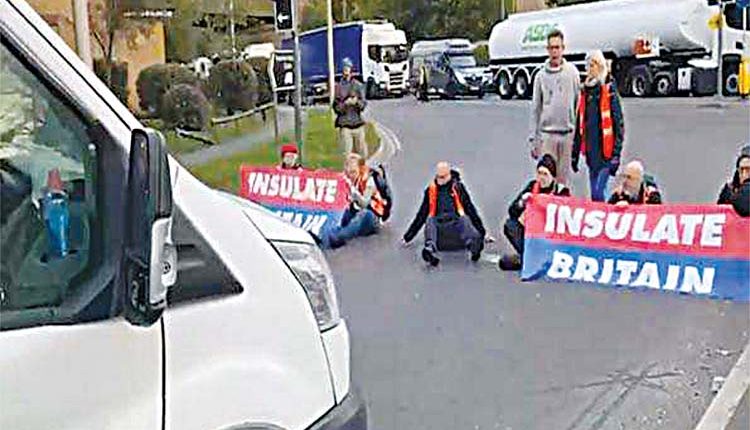 London, Oct 13 (Agency) Activists from Insulate Britain, an environmental campaign group demanding that the government insulate and retrofit homes across the UK, once again blocked a major highway encircling London on Wednesday, infuriating drivers and causing traffic chaos during rush hour. Videos posted on social media showed people at an industrial park near Dartford Crossing, east of London, snatching banners off the hands of the protesters and dragging them off the road, while asking them: “Why aren’t you at work?” The group said in a press release that around 40 people have returned to the streets for the thirteenth time over the past four weeks fully aware that their protest was in breach of the injunction granted to National Highways Authorities on September 22. “They are demanding that Boris [UK Prime Minister Boris Johnson] gets on with the job of insulating Britain’s homes starting with the homes of the poorest people in the country,” it said.

According to the climate campaign group, 8,500 deaths in an average UK winter are a result of cold homes, and thousands of families “have to choose between heating and eating.” Last week, UK Home Minister Priti Patel announced that the government will enforce penalties of up to six months in prison and unlimited fines, or both, against protesters who block major roads. Police will also be given new powers to crack down on disruptions caused to motorways and other key transport infrastructure. Despite the prison threat, Insulate Britain said their actions will continue until the government makes a meaningful statement indicating its intention to insulate “all of Britain’s 29 million leaky homes by 2030, and all social housing by 2025.”