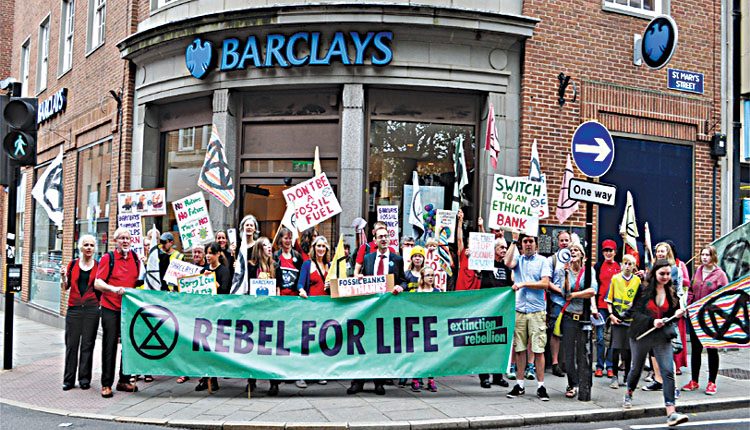 London, Apr 7 (FN Bureau) The London Metropolitan Police confirmed that seven women were arrested on Wednesday for allegedly smashing the windows of the Barclays Bank in the financial district of Canary Wharf, during a protest organised by the environmental group Extinction Rebellion against the bank’s continued investment in activities contributing to climate change.

“Police were called at approximately 7.13am on Wednesday April 7 to reports of a demonstration outside a commercial premise in Churchill Place, Canary Wharf. Officers attended and found a number of windows had been damaged. Seven women were arrested on suspicion of criminal damage and taken into custody at an east London police station,” a spokesman for the Metropolitan Police said. Extinction Rebellion said in a press release that Wednesday’s demonstration was part of its “Money Rebellion,” which is designed to expose the role of banks in the climate and ecological crisis via “nonviolent direct action, causing damage to property to prevent and draw attention to greater damage.”

The ecological movement also released images of the women, who wore patches reading “better broken windows than broken promises,” using hammers and chisels to break the bank’s windows. They also put stickers on the glass that read “In case of climate emergency break glass” before damaging the windows. “Barclays is the biggest funder of fossil fuels in Europe and has increased spending on fossil fuels in the past year, meaning its current trajectory runs counter to what is needed to achieve the targets of the Paris Climate Agreement,” the environmental group argued. Last week, several Extinction Rebellion activists sprayed the front of the Bank of England in the City of London with biodegradable fake oil.

In 2019, its members brought central London and other main UK cities to a standstill with widespread demonstrations, but the movement has been out of the streets since the first COVID-19 lockdown measures were imposed in March, 2020, except in September, when they gathered for several days in front of Parliament to request the passage of a Climate and Emergency Bill. Founded in 2018 in the UK, the group describes itself as a politically non-partisan international movement that uses non-violent direct action to persuade governments to declare a climate and ecological emergency, act to halt biodiversity loss and reduce greenhouse gas emissions to zero by 2025, and allow the creation of Citizens’ Assembly to make decisions on climate and ecological justice.