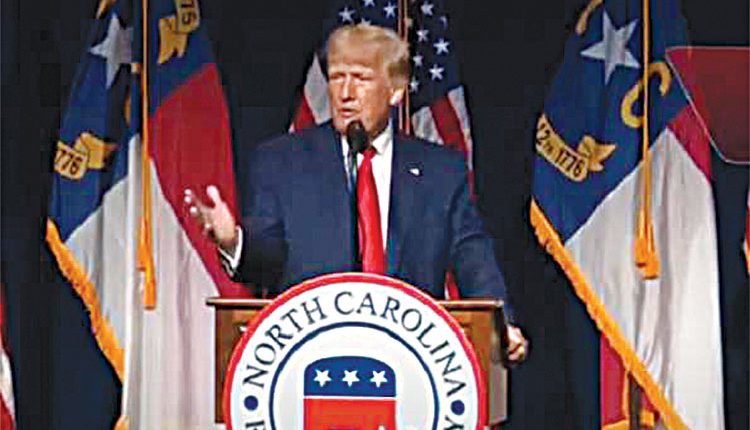 Washington, Jun 6 (FN Bureau) Former US President Donald Trump has blamed the administration of US President Joe Biden for an array of issues the US is currently facing, saying at the Republican Party convention in North Carolina that the US is being “demeaned and humiliated.” Speaking in Greenville on Saturday, Trump said that Republicans will have a “tremendous” 2022 and emphasized that “survival depends on Republicans being elected at every level.”

“Our border is wide open, illegal immigration is skyrocketing … Drugs are pouring in, gas prices are soaring, our industries are being pillaged by foreign cyber attacks, that’s a lack of respect for our country and for our leaders, and speaking of our leaders they are bowing down to China,” Trump said. He claimed that the Biden administration is spreading the wrong kind of ideology in the US that will lead to more division, not unity. “The Biden administration has also issued regulations to indoctrinate America’s school children with poisonous and divisive left-wing doctrines such as critical race theory,” Trump said.

He warned that without strong borders and election integrity “our country could be run as a dictatorship.” “I am not the one who is trying to undermine American democracy, I am the one who is trying to save it,” Trump said. The former president blamed the Biden administration for the southern border crisis and said that the Democrats have “turned America into a sanctuary for criminal aliens.” “The border is just the beginning of Biden disasters,” Trump warned. He said that Biden is being “openly mocked by Chinese negotiators and Russian President [Vladimir] Putin.” “They are taunting him and they are laughing at him and they are humiliating our country,” Trump said.

At the same time, Trump claimed to have a good relationship with Putin. “I have a very good relationship with President Putin, but there has never been anybody as tough on Russia as I was,” Trump said at the GOP convention in Greenville. Meanwhile, Biden said in an opinion piece published by The Washington Post on Saturday that Washington and its allies are ready to address what they consider Russia’s challenges to security and sovereignty, but the US does not seek conflict with Moscow and the upcoming talks between Biden and Putin in Geneva will present an opportunity to discuss areas of cooperation, such as strategic stability and arms control.

Trump mocks Fauci for advice on mask wearing
Washington, Jun 6 (Agency) Former US President Donald Trump has criticized US top infectious disease expert Anthony Fauci for being inconsistent in his advice on COVID-19. “Fauci said powerfully at the beginning ‘no masks’ … and then he went into masks, and then he became a radical masker,” Trump said on Saturday, mocking Fauci and proposing to wear up to four masks and goggles in the course of the next five to six years.
Speaking at the Republican Party convention in North Carolina, Trump said the US had his administration to thank for all achievements in the fight against COVID-19 and the current vaccination campaign. Since its global outbreak in March 2020, the coronavirus has impacted the United States more than any other country, with over 33.3 million Americans having been infected. The COVID-19 death toll in the US stands at over 590,000.
Fauci said in May that the United States has a greater number of coronavirus deaths than the officially reported figures. Speaking at the Saturday GOP convention, Trump blamed the coronavirus pandemic on China, saying that it should pay all other countries a compensation of $10 trillion minimum. Trump also accused the administration of US President Joe Biden of blocking a thorough investigation of the origins of the coronavirus.