Sunak to call for ‘clean growth’ at COP27 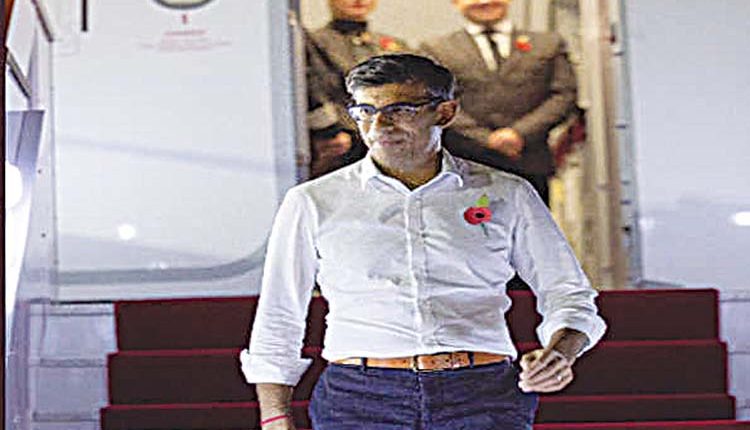 Cairo, Nov 7 (Representative) British Prime Minister Rishi Sunak, making his first outing on the international stage in Egypt, is slated to tell world leaders at the COP27 summit that the fight against climate change can become “a global mission for new jobs and clean growth”. He is likely to urge nations to stick to commitments made at COP26 in Glasgow a year ago, BBC reported. The UN’s climate change chief said a key aim to limit global temperature rises is “still within reach”. Sunak, who became the UK Prime Minister last month, reversed a decision not to attend COP27 earlier this week after a backlash from opposition MPs and campaigners and arrived in Sharm el-Sheikh on Sunday night. He will join other world leaders at the UN summit, including US President Joe Biden and France’s Emmanuel Macron, and unveil more than 200 million pounds funding to protect forests and for green technologies in developing nations, the BBC reported. He initially declined the invite as he said he was too busy preparing the November budget.In his opening address on Monday, Sunak will urge global leaders to “move further and faster” to avoid the worst impact of climate change by limiting global warming to 1.5C above pre-industrial levels, the report said. He will say Russia’s invasion of Ukraine has “reinforced” the importance of ending dependence on fossil fuels, but will argue the move can give a boost to new green industries.

Sunak will also meet French President Macron at the conference, where the topic of migrants crossing the English Channel in small boats is likely to be raised. Downing Street said Sunak will announce a further 65.5 million pounds for the clean energy innovation facility which provides grants to researchers and scientists in developing countries working on clean technologies — from biomass-powered refrigeration in India to lithium-ion batteries in Nigeria. It said the UK will also commit 90 million pounds for conservation in the Congo Basin rainforest and 65 million pounds to support indigenous and local communities. But Labour’s Ed Miliband said Sunak “had to be dragged kicking and screaming” to go to the summit and it was “implausible for him to claim the mantle of climate leadership”.The shadow Climate Change Secretary said the government should drop plans to issue more licences for North Sea exploration and end its opposition to onshore wind.As COP27 got under way, the UN itself warned that meeting the critical target of limiting temperature rises to 1.5C would take an “extraordinary effort”. “The science tells us that is it still within reach,” said the UN’s new climate chief, Simon Stiell. “We cannot lift the pressure. “Speaking to the BBC World Service’s Newshour programme, Stiell said just 29 states had strengthened their climate pledges since last year, which was “not enough”.

His remarks came after the UN’s weather and climate body released a report showing that the rate at which sea levels are rising has doubled since 1993.UN Secretary General Antonio Guterres described the report as a “chronicle of climate chaos” and urged governments at COP27 to answer the planet’s “distress signal” with “ambitious, credible climate action”. Global temperatures have risen 1.1C and are heading towards 1.5C, according to the UN’s climate scientists, the Intergovernmental Panel on Climate Change (IPCC). If temperatures rise 1.7 to 1.8C above 1850s levels, the IPCC estimates that half the word’s population could be exposed to life-threatening heat and humidity. Rich countries are also falling short in providing the finance needed to help developing nations adapt to a changing climate and develop cleanly, the UN has warned.But Stiell said the conference was off to a “hopeful start” after developing nations successfully lobbied to put on the agenda the thorny issue of “loss and damage”. This debate revolves around compensation money paid by wealthy countries to the states worst affected by climate change. Speaking to the BBC, David Panuelo, President of the Federated States of Micronesia, said bigger nations needed to “come good with their nationally-determined contributions”. Highlighting China, India, Mexico, Indonesia and Brazil, Panuelo said there are “many countries that need to come forward with… commitments to help meet this challenge that global communities are facing now”.

Lab-grown blood given to people