Some chaos was inevitable’ in withdrawal from Afghanistan 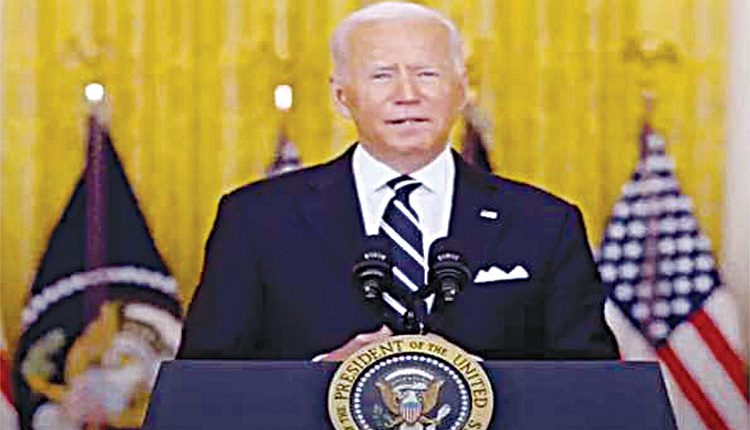 Washington, Aug 19 (Agency) US President Joe Biden has defended his decision of withdrawing American troops from Afghanistan, saying that “some chaos was inevitable”. Replying to a question if the US exit could have been handled better and whether any mistakes had been made, Biden told ABC’s George Stephanopoulos,”No, I don’t think it could have been handled in a way that, we’re gonna go back in hindsight and look — but the idea that somehow, there’s a way to have gotten out without chaos ensuing, I don’t know how that happens. I don’t know how that happened.” When asked if that was taken into account, he said “yes” but then amended his answer.

“Now exactly what happened, I’ve not priced in,” the President said. “But I knew that they’re going to have an enormous — Look, one of the things we didn’t know is what the Taliban would do in terms of trying to keep people from getting out. What they would do. What are they doing now? They’re cooperating, letting American citizens get out, American personnel get out, embassies get out, et cetera, but they’re having — we’re having some more difficulty having those who helped us when we were in there.” When the interviewer referred to the scenes of distress in Kabul airport of people hanging on to a moving US Air Force aircraft, Biden grew defensive. “We’ve all seen the pictures. We’ve seen those hundreds of people packed in a C-17. We’ve seen Afghans falling –” “That was four days ago, five days ago!” Biden interjected. “What did you think when you first saw those pictures?” Stephanopoulos asked. “What I thought was, we have to gain control of this. We have to move this more quickly. We have to move in a way in which we can take control of that airport. And we did,” Biden said. He also said the US is committed to getting every American out of Afghanistan following the takeover by the Taliban, even if it means potentially extending the mission beyond the August 31 deadline for a total withdrawal. “So Americans should understand that troops might have to be there beyond Aug. 31st?”

Stephanopoulos asked. “No,” Biden replied. “Americans should understand that we’re gonna try to get it done before Aug. 31st.” Biden said it was “a simple choice” to withdraw U.S. forces, and he faulted the Afghan government and its military for not more forcibly defending the capital. “Look, it was a simple choice,” Biden said. “When you had the government of Afghanistan, the leader of that government, get in a plane and taking off and going to another country, when you saw the significant collapse of the Afghan troops we had trained, up to 300,000 of them, just leaving their equipment and taking off — that was, you know, I’m not, that’s what happened.” The Biden administration has come under fire for the chaos unfolding in Afghanistan after the control of the country fell to the Taliban even as the deadline for the final US withdrawal approaches. The Taliban’s rapid recapture of Kabul happened more quickly than the Biden administration had expected, and led to chaos at Kabul airport.