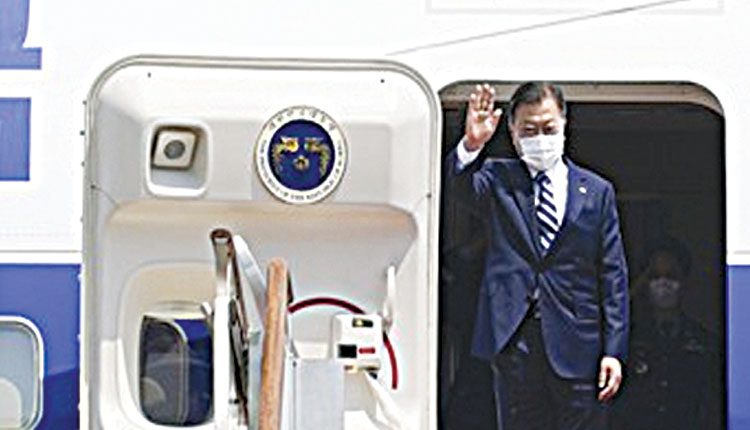 Moscow, May 19 (Agency) South Korean President Moon Jae-in has departed for the United States on Wednesday for a summit with his counterpart, Joe Biden, to discuss co-operation on COVID-19 vaccine and North Korea, the Yonhap news agency reported. “I will use this visit to the U.S. as an opportunity to strengthen cooperation on vaccines and (for South Korea) to move toward the goal of becoming a global hub for vaccine production,” Moon said prior to his departure as quoted by Yonhap.

The talks will mark the first face-to-face meeting the South Korean president will have with Biden and the results of the meeting will be announced at a joint press conference. According to the news agency the meeting will demonstrate what the relationship between the two countries will look like during Moon’s tenure as president which ends in May next year. At the moment, South Korea wants to accelerate its shipment of US-made COVID-19 vaccines and sign new deals on technology transfers for local production. The vaccine swap deal is also a topic on both leaders’ agenda.. In addition, Moon wants to ensure all dealings with North Korea will be kept peaceful and would like to boost the Korea peace process.

CEOs of South Korean companies including Samsung and LG are joining Moon on his trip to the US and are allegedly making plans for large-scale investment in the US. Moon will first visit the Arlington National Cemetery on Thursday to pay tribute at the Tomb of the Unknown Soldier. He is also to visit the Wall of Reembrace at the Korean War Veterans Memorial and meet with the House of Representatives speaker Nancy Pelosi.

China expresses protest as US vessel passes through Taiwan Strait