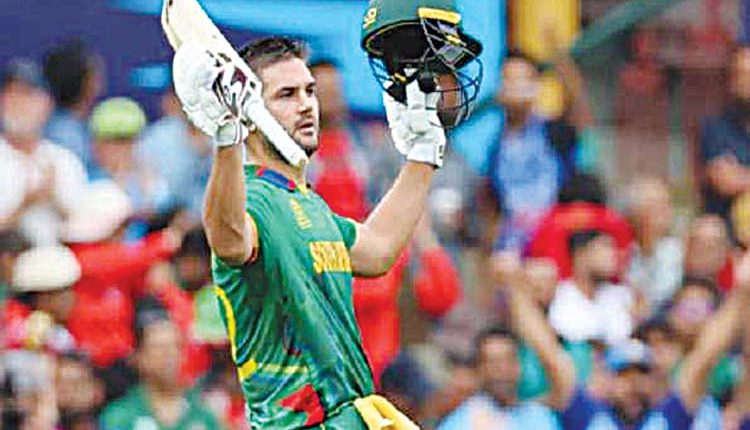 Sydney, Oct 27 (Representative) A stunning century from Rilee Rossouw helped South Africa to a resounding 105-run victory over Bangladesh in their ICC T20 World Cup Super12 match here on Thursday. Rossouw was in an aggressive mood against Bangladesh and his second T20I century helped South Africa post a big total of 205/5 at the SCG.In response, Bangladesh were bundled out for 101 in 16.3 overs. Proteas speedster Anrich Nortje picked up two wickets in his first over and bowled with supreme pace to finish with career-best figures of 4/10. Spinner Tabraiz Shamsi (3/20) collected his own three-wicket haul, while pace spearhead Kagiso Rabada (1/24) managed just one wicket from three decent overs.Rabada did play his part though with a superb piece of fielding late in proceedings as he threw down the stumps from close range to dismiss Hasan Mahmud. While it was the biggest team total achieved so far at the T20 World Cup 2022, Rossouw’s knock also broke a handful of individual records on a day where the left-hander was in scintillating touch.

Rossouw became the first South Africa player to score a century at a T20 World Cup and his innings of 109 was the fifth largest in the history of the event. He was in devastating form as he hit seven fours and a whopping eight massive sixes and his 163-run partnership with Quinton de Kock was the catalyst for South Africa’s huge score. De Kock’s innings was slow and steady in comparison, but the South Africa opener looked in excellent touch too as he added 63 from just 38 deliveries to continue his fast start to the tournament. If Rossouw and de Kock can continue this kind of form then South Africa are going to prove a force to be reckoned with in Australia.Not much went right for the Asian side, with only Mustafizur Rahman (0/25) able to keep South Africa’s scoring rate down and then Litton Das (34) the sole batter to make any impression during the chase. Much of Bangladesh’s good work from their victory over the Netherlands is undone with the loss, given their net run rate took a huge hit following the disappointing performance.The good news is they are still in the mix for a semi-final berth, but would likely need to win their remaining three matches – against Zimbabwe, India and Pakistan – to have any chance of progressing.

Women cricketers to get equal pay as men: BCCI