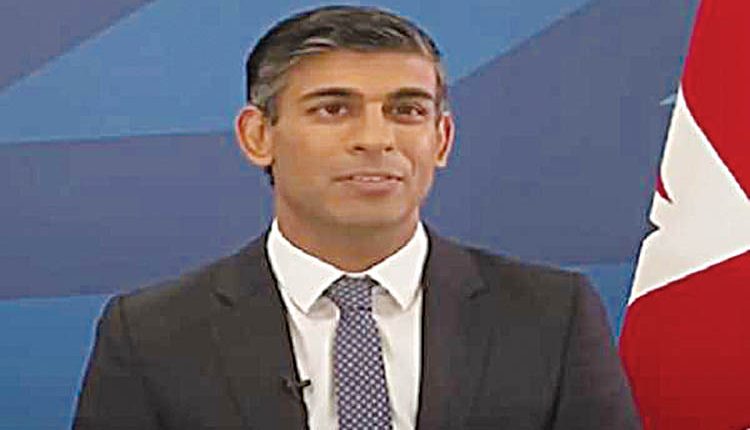 London, Oct 25 (Representative) Rishi Sunak, who on Monday took on the most powerful job in Britain as the 57th Prime Minister, never had dreams of making it in politics. A Star Wars fan, he instead wanted to “be a Jedi Knight”.Sunak, 42, shares his love of Star Wars with one of his closest friends in politics, Sajid Javid, who he succeeded as Chancellor in 2020, The Sun reported.Within Westminster, Rishi is well-known as a man who likes to start work early and finish late. His glamorous wife Akshata Murty, the billionaire daughter of India’s 6th richest man, is reportedly devoted to her husband of 13 years and doesn’t mind when he works until midnight. The highly-disciplined new Prime Minister likes to start every day with an early morning workout, either on the treadmill or on his beloved Peloton bike.Rishi’s Hindu faith helps guide his lifestyle. He is a lifelong teetotaller and doesn’t eat beef. When he became an MP, he swore his oath on the Hindu holy book, the Bhagavad Gita. Fittingly, he became Prime Minister on the first day of Diwali, the religion’s most important festival.It seems the new Prime Minister’s only vices are Coca-Cola, double chocolate muffins and enjoying “two biscuits” with a cup of tea, the Sun said.However, in true Rishi style he fasts on Mondays to help him stay in shape. The rigour and work-ethic which has marked him out throughout his career, first in banking and later politics, was honed during his upbringing in Southampton as the son of immigrant parents who moved to Britain in the 1960s. Rishi’s grandparents were from the Punjab in India, but his dad Yashvir, a NHS GP, was born in Kenya and his mum Usha, a pharmacist, was born in Tanzania.Rishi grew up pitching in at the chemist shop his mum owned and even helped balance the books, the Sun report said.

He said: “It really informed who I am actually, these are the values that I was brought up with — strong family, community service, small business.“That shaped me to being the person I am today. These are my roots and it is those values I want to bring to government.“I want to create a country where hard work is rewarded, where families are strong and supported and where aspiration is something that is celebrated.” Kuti Miah, a family friend of the Sunaks, who owns a curry house in Southampton where Rishi waited tables for a time, said Yashvir and Usha always “worked very, very hard” and were “passionately British”. Both these traits rubbed off on their eldest son, who has always supported England over India in cricket, the report said.A passionate Southampton FC fan since boyhood, Rishi’s footballing hero growing up was Matt Le Tissier. At the age of 11, Rishi’s life changed when he won a place at boarding school Winchester College, Hants. However, when he failed to bag an expected scholarship, his parents made the decision to shoulder the fees themselves. It was a struggle for the family and Rishi has admitted he felt shame as a schoolboy at having to wear a second-hand uniform.But he has never attempted to conceal his public school background, the Sun said. Rishi, who has served as the governor of a state school, has praised the amazing opportunities it afforded him and spurred him on to ensure all children have access to good education.He said: “That experience changed my life. My parents sacrificed a great deal so I could attend good schools.”The Sunaks’ ambitions for their children clearly paid off.Rishi’s younger brother Sanjay is now a psychologist and his younger sister Raakhi works for the UN’s global fund for education.

Rishi was one of few Asians at the 600-year-old Winchester College, but he didn’t let that hold him back. He instead became the first head boy at the school from an Indian background.In 1997, when Tony Blair became Prime Minister, a young Rishi wrote a piece for the school magazine complaining about Blair’s plans for “membership of a European superstate”.At 18 he won a place to study Philosophy, Politics and Economics at Oxford. But while there, he largely swerved politics, the Sun reported.He didn’t join the university Conservative Association and — unlike other Tory Prime Ministers such as like Boris Johnson or Theresa May — he didn’t get involved in the famed Oxford Union.Instead, he became president of the University Investment Society, where students invited bankers to talk to them about how to make it in the city.When Sunak graduated, it was no surprise then that he joined top investment bank Goldman Sachs. In later years he carved out a successful career in hedge funds, where he was seen as a smooth talker, adept at charming investors.Rishi left Goldman in 2004 to study for a Masters in Business Administration at Stanford University in California — where he was a prestigious ­Fulbright scholar, the report said.It was there he met Akshata, an artistic, fashion-loving student and daughter of N.R. Narayana Murthy, a self-made Indian IT billionaire. The couple wed in 2009 in her home city of Bengaluru in a two-day wedding attended by 1,000 guests.

Murthy saw Rishi as the ­perfect son-in-law and made him a director of his family’s private investment vehicle.Given he entered a league of the super wealthy after his marriage, a move into politics seemed surprising. Some commenters have speculated status was a motivator. Rishi was selected as a candidate in William Hague’s old seat of Richmond, North Yorks, one of the safest Tory seats in the country, in 2014.He had to work hard to win over locals — some of whom felt he had been parachuted in from London — campaigning at village fetes and talking to farmers at markets. He once joked that he and his wife made up the entire immigrant population of the constituency. In May 2015, he won the seat with more than 50 per cent of the vote, the Sun said. When elected, he bought a £1.5 million manor house in the constituency. He has locally been dubbed “the Maharaja of the Dales” due to the huge summer garden party he and his wife throw for villagers every year.The couple spend much of their time at their £7 million mews house in Kensington, West London, and one daughter attends the same school as Harper Beckham. Rishi is also known as a snappy dresser. A former colleague who worked with him on think-tank the Policy Exchange remembers how smart Rishi stood out among his more slovenly colleagues. They said: “He’s into his clothing. Everything from how Rishi dresses to how he structures his life is very well organised.” Given the wealth he married into — and his own successful career in banking — some commentators have wondered what motivates him in politics. But an ex girlfriend once observ ed: “He’s not in this for fame or wealth, as far as I can see. So I like to hope it means he’s genuinely in it to make things better.”