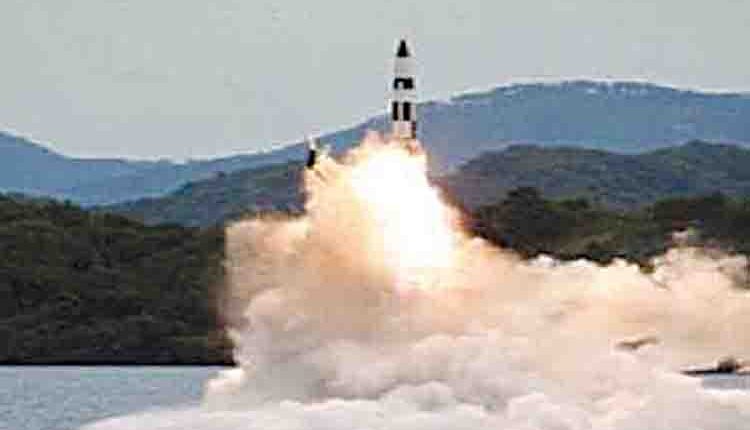 Pyongyang, Oct 11 (Representative) North Korea on Monday said its recent barrage of missile launches were actually nuclear attack simulation on the South. It comes as intelligence suggests North Korea is preparing to hold its first nuclear weapon test in five years, the BBC reported. In recent weeks, Pyongyang has launched seven sets of missiles in response to recent US and South Korea drills. On Monday, state media published extensive reports claiming the missiles were designed to carry tactical nuclear weapons.These are small short-range weapons intended for use on the battlefield. They said the military practised loading the missiles with dummy versions of these miniaturised warheads. They also claimed to have successfully simulated hitting South Korea’s military bases, ports and airports, and said the launches were a warning to US and South Korea.

State news agency KNCA ran photos of leader Kim Jong-un overseeing and “guiding” the tests. US and South Korea intelligence officials have been suggesting that the North may soon test a nuclear weapon for the first time since 2017. Experts believe it could also use the opportunity to detonate a smaller tactical device for the first time – the sort which would fit into the missiles it has been testing, the BBC reported. Last month Kim declared North Korea an “irreversible” nuclear power and revised its laws, allowing it to use nuclear weapons pre-emptively. Its previous policy had been to only use such weapons in response to an attack. It has also markedly stepped up its frequency of missile firings this year, carrying out over 40 missile launches this year so far – its most ever.Most of the launches in the past fortnight have been short-range missiles, which landed in the sea between North Korea and Japan. But North Korea also fired a longer-distance missile over Japan last Tuesday – which analysts say is a new intermediate-range ballistic missile, based on the weapon’s design.

This year has seen the North test-fire missiles from a variety of launch sites including trains and convoys – moving platforms which would make it harder for the weapons to be destroyed in a strike, analysts have suggested. The analysts told BBC that Monday’s state media reports framed the recent launches as “tactical nuclear operations units” – instead of describing them purely as missile tests – suggesting that North Korea has now developed a system for deploying smaller, short-range nuclear weapons. The 25 September-October 9 barrage were a response to the US deploying its nuclear-powered aircraft carrier the USS Ronald Reagan to waters around the Korean peninsula, and holding joint drills with Seoul and Tokyo. The acceleration marks a significant change from when Pyongyang pursued denuclearisation talks with then US President Donald Trump between 2018 and 2019. Analysts also said North Korea is also reacting to South Korean President Yoon Suk-yeol’s hawkish stance to the North and closer ties with the US.