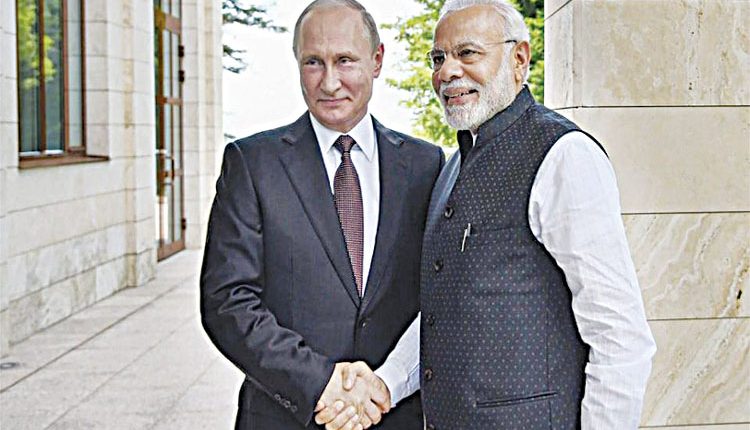 United Nations, Aug 10 (FN Bureau) Russian President Vladimir Putin has evinced interest in his country joining the Indian Ocean Rim Association (IORA), of which India is a founding member, as well as the Indian Ocean Commission, in a move to increase Moscow’s presence in the strategically important water body that is a vital conduit for trade, commerce, and energy. Taking part in the UN Security Council High Level debate on Maritime Security, chaired by Prime Minister Narendra Modi with India holding the month-long presidency of the UN body, Putin also said that Russia stands for “strict observance” of the laws enshrined in the UN Charter, such as “respect for sovereignty, non-interference in internal affairs and resolution of disputes by way of dialogue”.

“Russia is interested in building productive cooperation with the Indian Ocean Rim Association and the Indian Ocean Commission,” he said in his speech, according to a statement issued by the Russian Embassy. Russia has been joining in joint naval exercises in the Indian Ocean, as it seeks more leverage in the key water body, that has 80 per cent of the world’s seaborne oil trade passing through it. In February this year, Russian naval task groups drawn from the Baltic and Black Sea fleets took part in two international naval exercises – one with Iran and another as part of the Pakistan-led multilateral exercise Aman 21. In 2019, Russia also announced plans to double trade with African nations to over US$40 billion per annum by 2025, as Moscow seeks to broaden its global economic engagement with countries bordering the Indian Ocean. Russia has also been part of counter-piracy patrols in the Gulf of Aden in the Horn of Africa since 2009, and has been part of trilateral exercise MOSI with China and South Africa off the Cape of Good Hope in 2019.

It also joined trilateral naval Maritime Security Belt in the Gulf of Oman with China and Iran in 2019. Praising India for the initiative of holding the open debate on Maritime Security, Putin told PM Modi: ”Your initiative is in line with the constructive role that India has traditionally played in the international arena, thus contributing to the promotion of multifaceted, mutually beneficial and equitable cooperation.” “As you, Mr Prime Minister, aptly mentioned in your remarks, for us to achieve meaningful success in this area, we must unite the efforts of all stakeholders, as well as international organisations and regional associations with the central coordinating role of the UN and the UN Security Council.” Putin stressed that all participants “will agree that the UN principles are mandatory in the sphere of peaceful and responsible use of marine spaces, their natural resources, protection of the marine environment, and sustainable economic activity in the vast swathes of our planet covered by water.”

He said Russia is trying to help ensure security in the Persian Gulf zone and the Gulf of Guinea in the Atlantic, where cases of sea banditry with hostage taking have become more frequent. Putin said Moscow is ready to share its experience in antiterrorist operations as well as in preventing crime, and identifying and eliminating bandit groups, including at sea. “In this context, it would be feasible to think about establishing a special structure within the UN that would directly address problems related to combating maritime crime in various regions,’ he suggested. The Indian Ocean Rim Association (IORA) is an inter-governmental organisation formed in 1997 to foster regional economic cooperation. It has 23 member states and nine dialogue partners. The Indian Ocean Commission (IOC) is an intergovernmental body created in 1984 to protect the interests of the Western Indian Ocean islands. It has five members: Madagascar, Comoros, La Réunion (French overseas territory), Mauritius and Seychelles. India was admitted to the IOC last year as an observer.