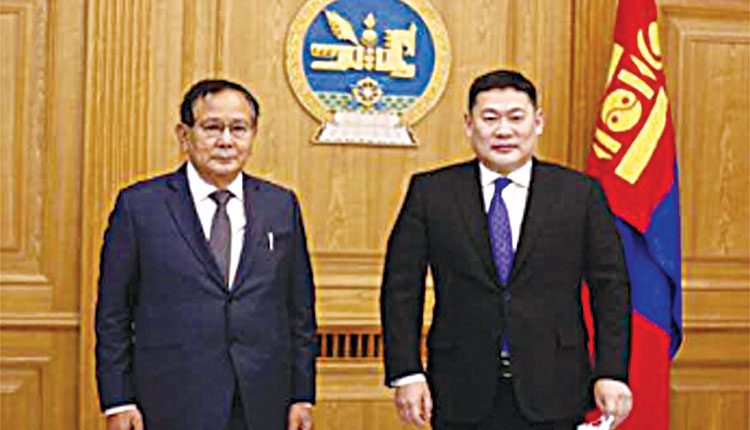 Ulaanbaatar/New Delhi, Nov 25 (FN Agency) Minister of State for External Affairs Rajkumar Ranjan Singh, who is on a four-day visit to Mongolia, called on Mongolian Prime Minister Luvsannamsrain Oyun-Erdene and exchanged views on intensifying bilateral relations and expediting a US$ 1.236 billion oil refinery project. Construction of the oil refinery, which has 1.5 million metric tonne capacity, is being done with Indian assistance State-run Engineers India Ltd (EIL) is providing engineering consultancy services for the project which is slated to be completed by December 2022, and will meet three-fourths of Mongolia’s requirement of oil. He also met Foreign Minister B. Battsetseg and exchanged views on the gamut of bilateral relations and the ongoing Oil Refinery Project and IT Centre of Excellence. The Mongolian Foreign Minister noted with satisfaction the enhanced developments of Strategic Partnership between Mongolia and India in recent years, and commended the close cooperation between the two Foreign Ministries.

In addition, she expressed pleasure that the recent minutes of discussion on bilateral relations and cooperation with External Affairs Minister Dr. S. Jaishankar in Nur-Sultan, on the sidelines of CICA Ministerial meeting, have shown visible developments, including the mutual recognition of COVID-19 vaccination certificates, said a Mongolian Foreign Ministry release. The Indian MoS reaffirmed his commitment to further strengthen the Strategic Partnership between Mongolia and India in areas such as security, trade, economics, science, technology, education and culture. The two sides discussed the progress of the oil refinery project, which stands as a symbol of our Strategic Partnership, and potential exports of some mining products, such as coking coal, to India, it said. MoS Singh also held official talks with Deputy Minister for Foreign Affairs B. Munkhjin, during which they exchanged views on further consolidating Mongolian-Indian Strategic Partnership. The two sides also reviewed the progress of joint projects and discussed wide range of issues of bilateral cooperation in the field of security, trade, economics, science, technology, education and culture. During the meeting, the two Deputy Ministers shared the views on international and regional issues of mutual interest, a press statement from the Mongolian FM said.