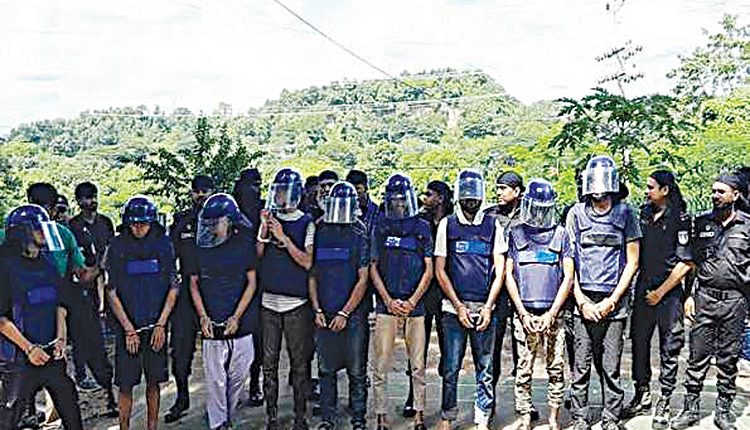 Dhaka, Oct 22 (Bureau) An armed group named ‘Kuki-Chin National Front’ (KNF) is training some young men who have suddenly disappeared from different parts of Bangladesh in the remote hills bordering India and Myanmar, and a new militant organization is being formed. Commander Al Moin, director of Rapid Action Battelion (RAB) media wing, presented this information at a press conference Friday. At the press conference, RAB said recently, an operation was started in the hills to catch the top leaders of the new militant organization ‘Jamatul Ansar Fil Hindal Sharqiya’. Recently, in the name of newly so-called Hijrat (emigration or moving from one place to another) due to militancy, the homeless youth took shelter in hilly hideouts for Jamaatul Ansar.

In these shelters, the young emigrants are being trained in handling heavy weapons.Recently, RAB published the list of 55 youths from 19 districts who were driven out of their homes in the name of voluntary migration due to extremism. The full names and addresses of 38 of them were published. RAB commander Khandaker Al Moin said more than half a hundred militants of the organization are believed to be hiding in the mountains. He also said the operation will continue until they are found completely.Meanwhile, RAB arrested a total of 10 people, including seven from the new militant organization Jamaatul Ansar Fil Hindal Sharqiya and three from the hill separatist organization, from different areas of Bandarban and Rangamati on Thursday night. During this time, a large amount of arms and ammunition were recovered from them.A number of militants were arrested by the force.

Diwali 2022: Impress your loved ones with these 9 gifts