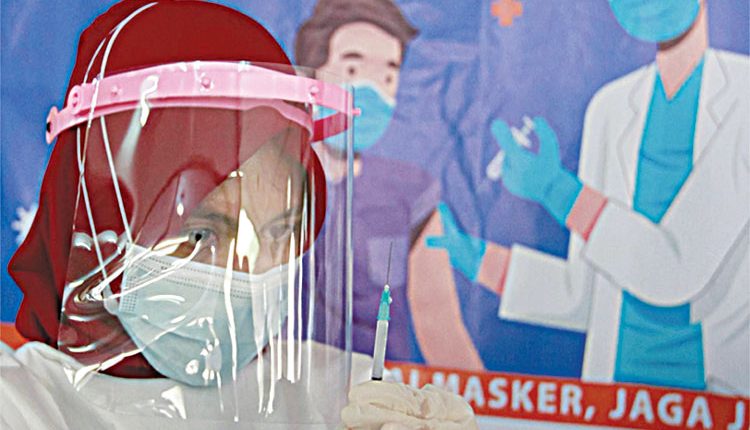 Jakarta, Feb 17 (Agency) Nearly 4,000 Indonesian firms, many of them textile companies, have signed up to take part in a proposed scheme that would allow the private sector to purchase COVID-19 vaccines procured by the government and inoculate their staff. Proponents argue the scheme would speed up vaccinations, kick-start key areas of the economy that have been hammered by the pandemic and lessen the government’s burden as companies would bear the costs of distributing the vaccines and conducting vaccinations. But some health experts worry about the potential for inequity if workers end up getting prioritised for vaccines over more vulnerable sections of the population. The scheme was proposed by the Indonesian Chamber of Commerce and Industry last month and the health ministry is currently working on draft rules but they have yet to be approved. “The scheme is for the people.

Vaccinations would go faster and once herd immunity is reached, the population can be fully mobilised for economic activity,” Rosan P. Roeslani, the chamber’s chairman, told Reuters in an interview. Factories currently operating at half capacity could return to normal after workers received their shots, he added. Indonesia is grappling with the worst outbreak of the novel coronavirus in Southeast Asia, reporting more than 1.23 million infections and some 33,590 deaths. The economy shrank 2.1% last year, its first full-year contraction in more than two decades. If the scheme is approved, Indonesia will be among a handful of countries that allow businesses to buy vaccines to inoculate their employees. Private market vaccine sales are allowed in India, Pakistan, Thailand, and the United Arab Emirates but the amount sold is small as manufacturers have prioritised supplies to governments. Rosan stressed that Indonesia’s scheme would not be using vaccines already earmarked for the government’s ambitious 15-month plan to vaccinate 181.5 million people or two-thirds of the population.

Indonesia has contracts to purchase vaccines for some 115 million people, signing deals with China’s Sinovac, AstraZeneca Plc and Novavax as part of the free rollout. The proposed scheme would still buy vaccines from Indonesia’s state-owned pharmaceutical company Bio Farma but use different vaccines which have been ordered from companies such as China’s Sinopharm, Rosan said. Other vaccines such as Moderna’s and Russia’s Sputnik V are also being considered, he added. Advertisement The Sinopharm vaccine is being considered by the country’s food and drug agency (BPOM) for approval, he added.