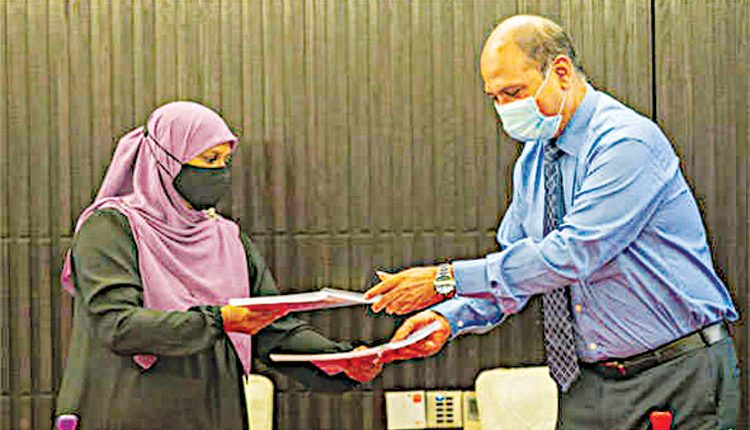 Male, Aug 26 (FN Bureau) Indian construction and engineering major Afcons has bagged the contract to build a 6.7 km bridge and causeway link project in the Maldives, the largest-ever infrastructure project in the Indian Ocean island nation, being funded by India. On Thursday, Indian High Commissioner to the Maldives, Sunjay Sudhir was present at the inking of the agreement between Afcons and the Government of Maldives of the Thilamalé bridge project, or the Greater Malé Connectivity Project (GMCP). The Greater Male Connectivity Project is a key priority for the government of President Ibrahim Solih. It is being funded under a $100 million grant from India and a $400 million Line of Credit from India.

Sudhir noted that the USD 500 million Greater Malé Connectivity Project supports the vision of President Ibrahim Mohamed Solih and Indian Prime Minister Narendra Modi for strong bilateral relations. “It is a concrete example of working in tandem of the India-first foreign policy of the Maldives and the neighborhood-first foreign policy of India. The importance of this mega project is signified by the fact and as Finance Minister Ibrahim Ameer just mentioned that 20 percent of the cost that is about USD 100 million will be met through an Indian grant and the remaining USD 400 million through a line of credit by the EXIM bank of India,” he said in his remarks. Sudhir said that the seeds of the project were planted during External Affairs Minister Dr. S Jaishankar’s visit in September 2019. Following this, a meeting was held where Minister of National Planning, Housing and Infrastructure Mohamed Aslam made a “very detailed” and thorough presentation on the project. He said that the Indian delegation was “indeed so impressed” that the government immediately got down to work and since then, so much progress has been made. “It has been a mission for all of us and today I can say that it is mission accomplished, thank you all. Of course, it’s not all yet done but at least we have reached a very concrete milestone today and now we move to the implementation stage and we look forward to the ground-breaking of the project very soon,” he said.

The Indian High Commissioner said that GMCP will be an iconic and enduring aspect which fulfils the objectives it is supposed to serve for the Maldivian government and is also concrete proof that India is a “robust” development partner of the Maldives, in addition to being the first-responder in times of emergency in the Maldives. The newly-initiated project will support livelihoods, provide jobs and contribute in propelling Maldivian economy to its true potential. Sudhir expressed hope and confidence that the economy of Maldives will reach the USD 10 billion mark, “very soon”, Rajje.Mv quoted him as saying. Sudhir was joined by Finance Minister Ibrahim Ameer, Economic Minister Fayyaz Ismail, Planning Minister Aslam and Transport Minister Aishath Nahula at the signing ceremony. Afcons has also been contracted to develop the roads of Addu City. According to the Maldives Planning Ministry, the Greater Male’ Connectivity Project is a 6.7km sea crossing link from the southwest corner of Male, running adjacent to the south shore of Villingili, then along the southern periphery of reclaimed land on Gulhifalhu, and terminating on land at Thilafushi. The main bridge component will be 1.4 km long. Traffic lights will be installed at the Male-Villimale junction, while a roundabout intersection will be at Thimafushi-Gulhifalhu junction. The lights on the bridge will be solar-powered. The project is expected to reach completion in two years.

US Treasury approves humanitarian aid to Afghanistan despite Taliban sanctions