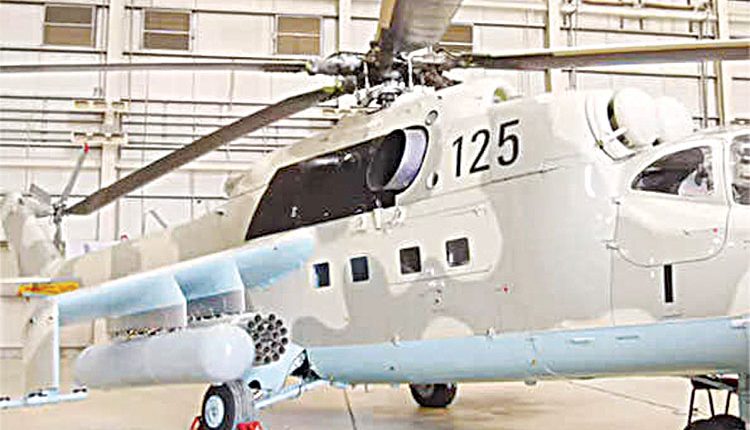 Kabul, Aug 11 (Agency) One of the Mi-35 attack helicopters, gifted by India to the Afghan Defence forces two years ago, may have fallen in the hands of Taliban which have reportedly captured the Kunduz airport. Even though there is no official confirmation yet from either the government of Afghanistan or India, messages and videos circulating on the social media, including the ones posted from pro-Taliban handles, suggest that a MI-35 helicopter was taken into custody at the Kunduz airport by the fundamentalist militia after taking over the key Afghan city on Sunday. In the videos and photos, the helicopter is seen with the rotor blades removed.

Videos and photos posted by security expert Joseph Dempsey of the International Institute for Strategic Studies show a Taliban militant posing next to a Mi-35 helicopter parked somewhere on an airport and riding away on a bike. India had gifted the two Mi-35 choppers to the Afghan Air Force on October 15, 2019, in support of the country’s counterterrorism efforts. India’s Ambassador to Afghanistan, Vinay Kumar, and the then acting Afghan Defense Minister, Asadullah Khalid, had attended the ceremony of the formal handing over of the helicopters to the Afghan Air Force at a military airbase in Kabul. The two multi-role Mi-35 – as well as a pair delivered earlier in 2019 – were replacements for four helicopters India transferred to Afghanistan between 2015 and 2016.

US, Mexico to hold economic meeting on September 9 in Washington

IBSA has high stakes in expediting reforms of multilateral bodies