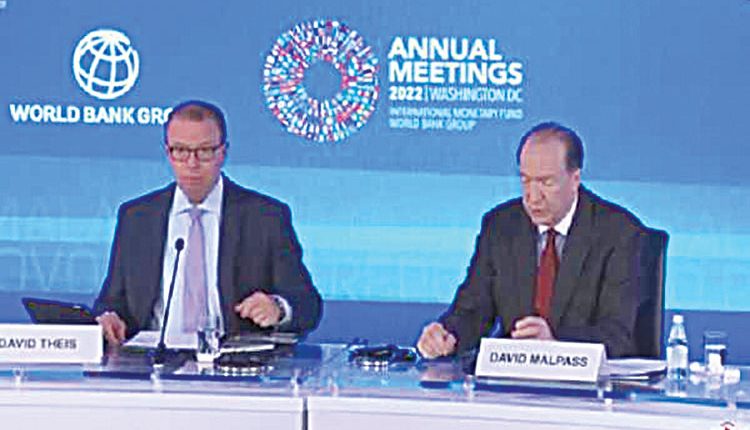 Washington, Oct 14 (FN Agency) The global economy is “dangerously close” to a recession, as inflation remains elevated, interest rates rise, and growing debt burden hits the developing world, World Bank President David Malpass said. “We’ve lowered our 2023 growth forecast from 3 per cent to 1.9 per cent for the global growth, that’s dangerously close to a world recession,” Malpass on Thursday said at a press conference during the IMF and World Bank annual meetings.” All of the problems that people have taken note of, the inflation problem, the interest rate rises, and the cutoff of capital flow to developing world hit the poor hard,” he said, highlighting the buildup of debt for developing countries. “That’s a world recessions could happen under certain circumstances,” Malpass said.In a study published in mid-September, the World Bank warned that as central banks across the world simultaneously hike interest rates in response to inflation, the world may be edging toward a global recession in 2023, with a growth forecast of only 0.5 per cent. The World Bank chief noted at the press conference that world population growth is estimated at 1.1 per cent per year.

“So if you get much slower in terms of world growth, that means people are going backward,” Malpass said in response to a question from Xinhua. Citing a recent World Bank report, Malpass said that Covid-19 pandemic dealt the biggest setback to global poverty-reduction efforts since 1990, pushing about 70 million people into extreme poverty in 2020, and the war in Ukraine threatens to make matters worse. According to the Poverty and Shared Prosperity Report, global median income declined by 4 per cent in 2020, the first decline since its measurements of median income began in 1990. “So if we have a world recession now, that would also depress median income, meaning that the people in the lower half of the income scale are going down,” Malpass said. The World Bank chief also noted that he has been concerned about the concentration of capital in the world in the top end of the advanced economies. “So that’s, I think, one of the issues that the world has to deal with to allow capital to flow to new businesses and to developing countries, that would take a change in the direction of fiscal and monetary policies in the advanced economies,” said Malpass. The world is facing very challenging environment from the advanced economies, and that has serious implications, dangers for the developing countries, he said. “My deep concern is that these conditions and trends might persist into 2023 and 2024.”