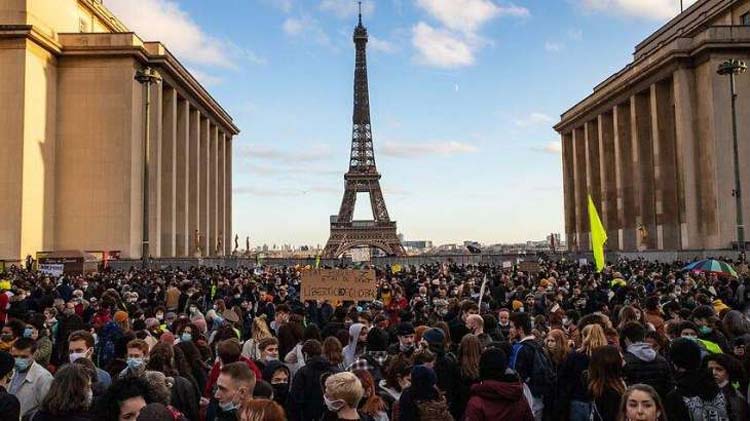 Paris, Nov 25 (Agency) – French parliament late on Tuesday passed the bill on global security, criminalizing the publication of images of police officers online, despite the recent riots against the legislation criticized for possible infringement on the freedom of the press. Article 24 of the bill, which has come under especial criticism as it makes it illegal to distribute videos and photos identifying law enforcement officers and thereby violate their “physical or mental integrity,” was approved by the parliament on Friday, against the backdrop of demonstrations over the past week. “Deputies adopted the proposed global security bill at first reading. Voting: 558. Majority: 247. For: 388. Against: 104.

Abstentions: 66,” the National Assembly wrote on Twitter late on Tuesday. The draft law will be considered further by the French Upper House of parliament in January. Critics of the legislation have said say it may hamper the functions of mass media to cover protests and inform the population, while also violating freedom of expression. The supporters, on the other hand, claim its main purpose is to provide more protection to security troops which have been subjected to a series of violent acts over the past months, including the attack on a police unit in a Paris suburb of Champigny-Sur-Marne in mid-October, which prompted the demonstration of police officers demanding better protection from the state. French Prime Minister Jean Castex said on Twitter that the government has never had any intention to undermine freedoms of press and expression, and added that he would refer the bill’s controversial Article 24 to the country’s Constitutional Court.

Notably, the article includes a one-year prison sentence or a fine of 45,000 euros (over $53,000) for the distribution of police images. Voting on the draft bill came a day after Paris police dismantled a migrant camp in central Paris, using controversial methods to disperse refugees, which resulted in a probe being launched against the security forces.