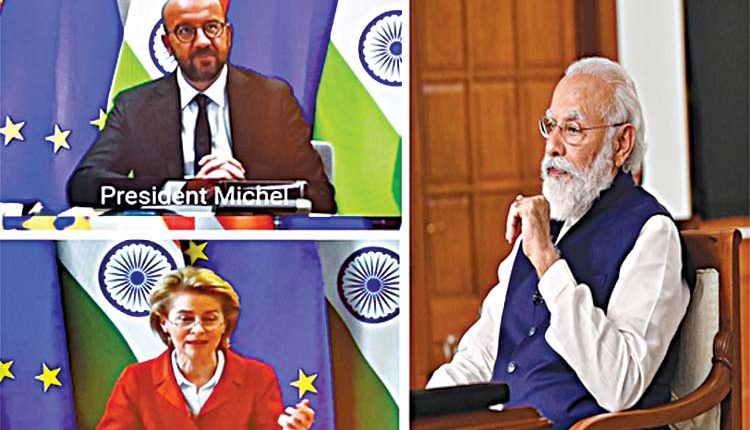 Moscow, May 8 (Bureau) The European Union and India agreed on Saturday to restart the stalled free trade talks and find solutions to long-standing market access issues. “We agreed to resume negotiations for a balanced, ambitious, comprehensive and mutually beneficial trade agreement which would respond to the current challenges,” a joint statement read.

The statement was issued after Indian Prime Minister Narendra Modi spoke by video with EU leaders meeting in Portugal. European Council chief Charles Michel called the meeting a “new chapter” in EU-India strategic partnership. The leaders also agreed to begin negotiations on a stand-alone investment protection deal and a separate pact on geographical indications, which could be integrated into the trade arrangement. According to the Indian Foreign Ministry, the negotiations on the trade and investment agreements “will be pursued on parallel tracks with an intention to achieve early conclusion of both of them.” Additionally, India and the EU pledged to have “dedicated dialogues” on regulatory cooperation, market access issues and supply chain resilience, the ministry noted.

Another prospective venue for EU-India cooperation discussed at the meeting was the Connectivity Partnership, which aims to boost private and public investments in joint connectivity projects in energy, transport and digital sectors. Talks on a trade pact between the EU and India broke off in 2013 amid disagreements over EU subsidies to the agriculture sector, patent protection, data security, EU curbs on the work of Indian professionals in Europe, and access to India’s government procurement market.