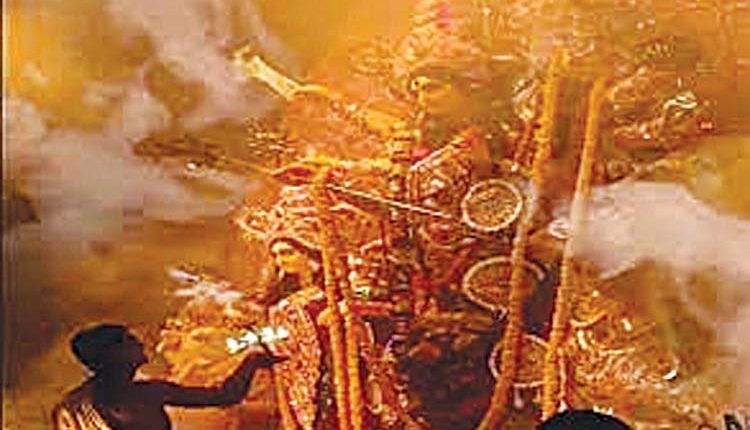 Dhaka, Sep 26 (Representative) Mahalaya Sunday is the day to give the message that Durga, the ten-armed goddess, the destroyer of demons, the powerless goddess, is coming to earth. At the end of Pitra Paksha, the beginning of Devi Paksha. Mahalaya will be held in the morning through Chandipath, Mahalaya ghat installation and special puja. Mahalaya means counting the days of Durga Puja. The word Mahalaya has a special meaning. Termination of pitra paksha or previous condition of devi paksha is called mahalaya. However, there is a difference of opinion in this regard. The word ‘mah’ means ‘worship’, and ‘mah’ also means festival. Besides, Mahalaya means Mahalaya with ‘great’ and ‘alloy’. With this ‘A’ adds the ‘alloy’ of worship. The word ‘alloy’ means ‘shelter’. Again, Mahalaya refers to the fatherland, where the heavenly ancestors reside.In traditional religion, Devipaksha is said to be the most auspicious day.

All kinds of auspicious work can be done at this time. The tarpan to the ancestors will start from the dawn of Mahalaya. In Sanatan Dharma, it is said that departed souls come from heaven to mortal world. Many people pray for the well-being of their deceased relatives and ancestors. Tarpan is done by offering water-sesame-food to the ancestors. There is in mythology; Defeated by the power of the evil demon, the gods were thrown into heaven. All around evil glory.The gods came together to destroy this evil power. In the destruction of the power of the demon, the emergence of a great power was felt. Goddess Durga appeared from the rays of the gods. According to Devi Bhagavata Purana, the future of the world can be understood by judging the vehicle used by Goddess Durga to come to the world and return to Kailash.