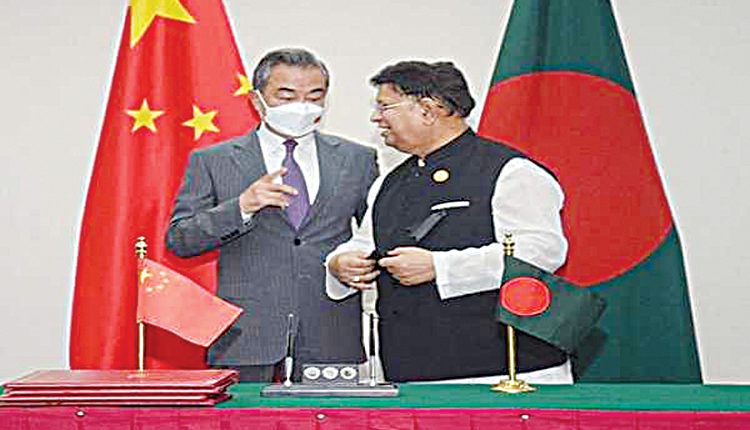 Dhaka, Aug 7 (Representative) Chinese foreign minister Wang Yi expressed gratitude to the Bangladesh government for reiterating its support to the “One China” policy. He explained China’s position on the Taiwan issue during a meeting with Bangladesh foreign minister AK Abdul Momen.Md Shahriar Alam, state minister for foreign affairs, told newspersons this after a meeting of the two foreign ministers at a hotel in the capital city on Sunday morning. He also informed the media that the meeting between the foreign ministers continued for an hour. Later, they signed four instruments and MoUs. Those are – handing over certificate of 8th Bangladesh-China Friendship Bridge in Pirojpur, renewal of five-year MoU on assistance in disaster management, renewal of MoU on cultural cooperation for 2022-2027, MoU on Marine Science between Dhaka University and China’s First Institute of Oceanography. Wang Yi arrived in Bangladesh on two-day state visit on Saturday afternoon.

On the second day of the visit on Sunday morning, foreign ministers of both the countries led respective delegations at a breakfast meeting at a city hotel. Later, he went to Gonobhaban to pay a courtesy call on prime minister Sheikh Hasina. Wang Yi will leave Dhaka after the courtesy call on.Bangladesh’s state minister for foreign affairs said China seeks collaboration in building a common future for all the countries of the world. They sought Bangladesh by them in this initiative. The China foreign minister also mentioned that there are some countries that either misunderstand China or make mistake in explaining China’s intention. We talked about that, Shahriar added.Wang Yi is visiting Bangladesh at a time when tension is prevailing between China and the US over Taiwan issue. Chinese president Xi Jinping recently announced about forums like Global Security Initiative (GSI) and Global Development Initiative (GDI). China seeks Bangladesh by them in such initiatives.In response to whether any discussion was held on those issues, Shahriar Alam said, “This was a closed door meeting.

As per the procedure it is their consideration of how much of what they said could be made public. Of course there was a detailed discussion on these issues (Taiwan, GDI and GSI). They raised the issues. But this was not a matter of discussion. We have many other things to prioritise. But they have explained their position.He thanked us as we reiterated our position on ‘One China’ policy.”Pressed on, the state minister for foreign affairs further said, “We know they put emphasis on abiding by international rules over Taiwan issue. They have explained their position to us.”Shahriar Alam further said, “China has increased the scope of duty free access of Bangladeshi products to its market by another one per cent, which will be implemented from 1 September. We hope this will remove the limitations on exporting oven products from the textile and readymade garments sectors of Bangladesh. Maybe we’ll get the list by afternoon.

I think this is the highest benefit for us of this tour. They will provide us duty free access to another one per cent products and services.”China foreign minister agreed on starting a joint survey on probable prioritised trade agreement or prioritised duty agreement in the meeting.Shahriar Alam said, “The Chinese foreign minister said they will help in relocating Chinese companies and sharing technologies to the special economic zone in Anwara, Chattogram. He emphasised on taking steps to begin the special economic zone’s activities soon.” He also informed media that the Bangladesh foreign minister requested to increase Chinese investment in Bangladesh. “Removing trade disparity was a big issue in the discussion.”Foreign minister Abdul Momen raised the Rohingya issue and sought China’s help in resolving the crisis. He said China’s strong role is needed to resolve the crisis. China went forward to resolve the crisis but the matter needs to be resolved for once and all.

Shahriar Alam said, “A detailed discussion was held on the Rohingya issue. China said it has been trying to dispel the domestic challenges of that country since that has been creating problems not only for Bangladesh, but for many others. China will go on working for a political resolution of Rohingya crisis.” Responding to another question on the issue, the state minister for foreign affairs said, “We have said it clearly that many days have passed. The magnitude of our suffering has increased and that is not only for the local people. Smuggling of arms and drugs at the camps has increased. Our law enforcement agencies have been working there amid serious risk.“We must stop the gradually declining situation there. Earlier we said we have given them shelter as they have come here. But we are facing many problems now. We’ve explained that. We hope he will look into the matter and take action upon return,” he added.