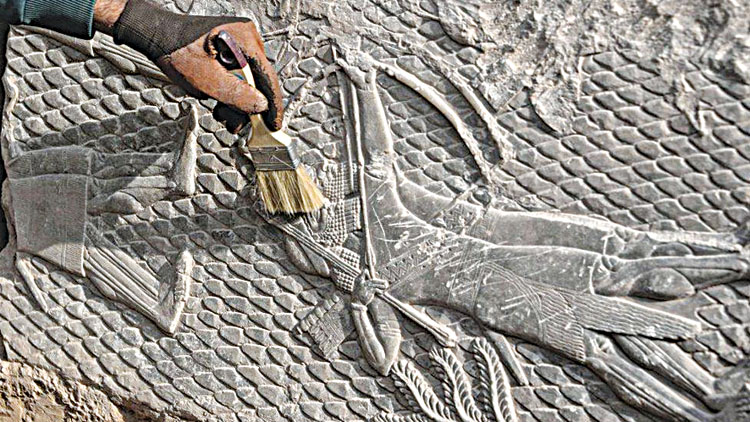 Baghdad, Oct 20 (Agency) Archaeologists in northern Iraq have made an exciting discovery — unearthing beautiful rock carvings that are about 2,700 years old. They were found in Mosul by a US-Iraqi excavation team working to reconstruct the ancient Mashki Gate, which Islamic State militants destroyed in 2016, BBC reported. Iraq is home to some of the world’s most ancient cities, including Babylon. But years of turmoil have seen many archaeological sites looted and damaged by militants and military action, the BBC reported. The eight marble reliefs show finely chiselled war scenes, grape vines and palm trees.

They date back to the Assyrian King Sennacherib, who ruled the ancient city of Nineveh from 705 to 681 BC, the Iraqi State Board of Antiquities and Heritage said. The powerful king was known for his military campaigns, including against Babylon, and his vast expansion of Nineveh. The Mashki Gate was one of the largest in Nineveh, and was an icon of the city’s size and power. The gate was reconstructed in the 1970s, but was destroyed with a bulldozer by IS militants in 2016, BBC said. The militant group ransacked and demolished several ancient sites that pre-date Islam in Iraq, denouncing them as symbols of “idolatry”.

SL wants Bisons from India or not?