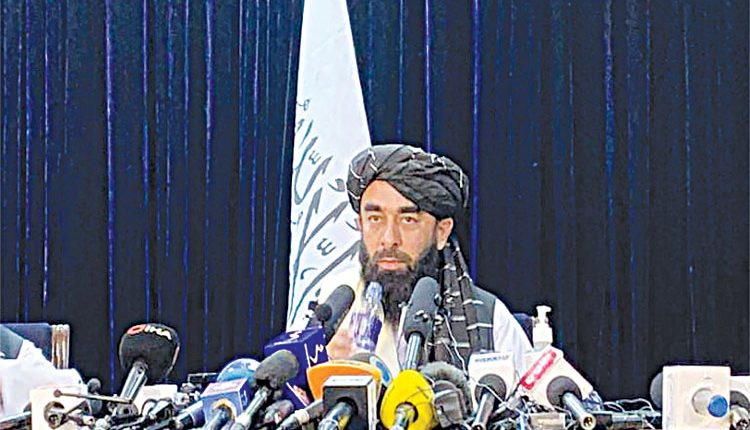 Kabul, Aug 17 (Agency) The Taliban on Tuesday assured the global community, including Afghanistan’s neighbours, that they will not allow the country’s territory to be used to threaten the security of any other country. Taking their first press conference after their takeover of Kabul, the Taliban spokesperson Zabiullah Mujahid, asked if Afghanistan’s soil would be allowed by terror organisations to target other countries, said: “We will not allow any foreigners who wish to harm or threaten the security of other countries any space in Afghanistan, and we have assured this.” “We want to reassure that Afghanistan will not be used against anybody, whoever wants to take advantage of our soil, our country, they will not be allowed,” he said. The global community, including India, has voiced apprehension of Afghanistan territory being used by terror networks and elements to target neighbouring countries, including India, under the Taliban regime.

Earlier, in a speech, he said, “We want to assure the international community, including the US, that nobody will be harmed. I would like to assure the regional countries, neighbours, that we are not going to allow our territory to be used against anybody or any country in the world. The whole global community should be assured that we are committed to this pledge, that you shall not be harmed anywhere from our soil.”. He also urged that the global community should treat the Taliban government within the international framework. “We would also like to request the international communities that are within recognised international boundaries and interactions, that we should be treated accordingly within the framework.” Clarifying on the religious basis of their government, he said: “We do not want to have any problem with the international community, we would like to act on the basis of the principles of our religion, of our culture; and we have given a lot of sacrifices. We have the right to act on the basis of our religious principles.”

“Just like the Afghans, other countries have different rules, different policies, and the policies they follow are different. In the same way, Afghans also have the right to have their own rules and regulations and policies so that they are at an advantage, for the benefit of the nation, and the people, so that they are in accordance with our values. So, nobody should be worried about our norms and principles,” he stressed. Mujahid also promised that the Taliban would rid Afghanistan of opium cultivation, which has been one of the banes of the country. “I am giving the assurance of Afghanistan — that there will be no production of drugs in the country. When we were in power the cultivation of opium was zero, but during the past government the cultivation of opium was high, drug production was happening. There will be no drug production, no drug smuggling under us. We saw today that our young people are on drugs near the walls, this was making me very, very sad that our young people are addicted to drugs. “Afghanistan will not be a country of cultivation of opium anymore, but we need international help for that, the international community needs to help us—we need to have funding, we will bring opium cultivation to zero again,” he promised. Mujahid also said that they are working on forming a government and would announce it soon. “The government is being formed, there will be law and order. Just a few more days, be patient, and very soon I promise that you will have a government and a rule of law.”