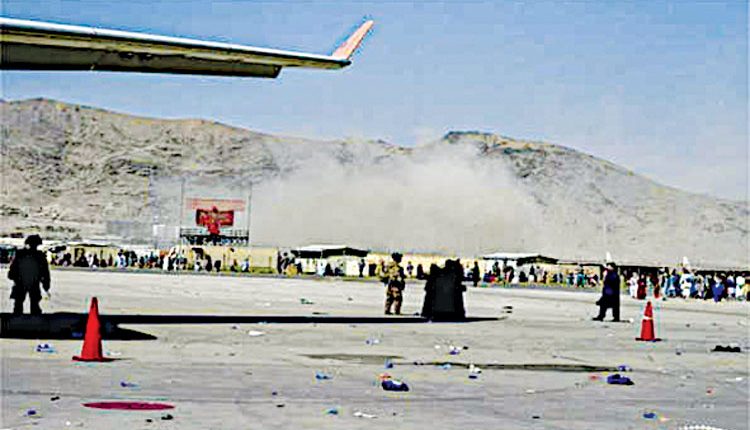 Kabul, Aug 26 (Agency) At least 40 people were killed and 120 wounded, many critically, including US citizens, in twin explosions that ripped through thronging crowds outside Kabul airport on Thursday evening. Afghan Health Ministry sources raised the death toll to 40 and the number of those wounded to 120, in the suspected suicide attacks outside the airport. The blasts came hours after the US warned its citizens to stay away from the airport citing security fears. Three US Marines were among those injured in the first blast at Abbey Gate at Kabul airport, Fox News reported, quoting US officials.

Some social media sites said Americans were among those killed, but there was no confirmation. Taliban spokesperson Zabihullah Mujahid strongly condemned the blasts but added that the explosions took place in an area where the US forces are responsible for the security. “The Islamic Emirate strongly condemns the bombing of civilians at Kabul airport, which took place in an area where US forces are responsible for security. The Islamic Emirate is paying close attention to the security and protection of its people, and evil circles will be strictly stopped,” he tweeted. A video of the blasts, taken from afar, showed a huge bright explosion lighting up the sky and then plumes of smoke rising high into the sky, followed by another explosion within seconds. Pentagon press secretary John Kirby said one explosion took place at the Abbey Gate of the airport, while the other one took place near Baron Hotel, a short distance away. He said the first explosion was “the result of a complex attack that resulted in a number of US and civilian casualties”.