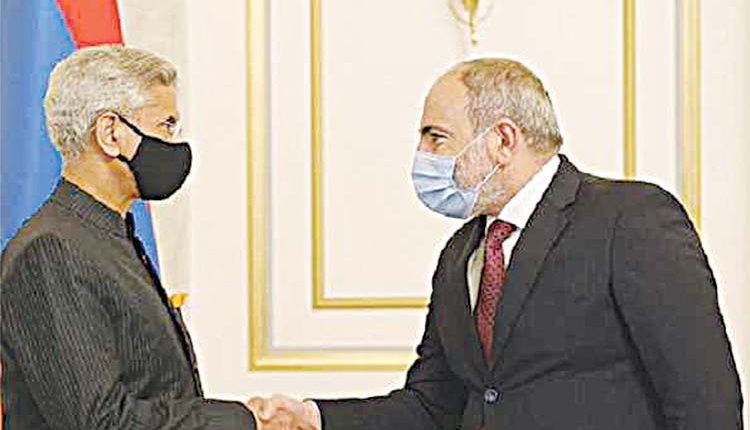 Yerevan / New Delhi, Oct 13 (FN Bureau) External Affairs Minister S Jaishankar on Wednesday called on Armenian Prime Minister Nikol Pashinyan during which they agreed to develop a broad agenda of practical cooperation for the mutual benefit of the two sides. Jaishankar also met the President of the National Assembly Alen Simonyan and discussed about nurturing the bonds between the two parliamentary democracies. He also held talks with his Armenian counterpart Ararat Mirzoyan. Later he also met Indian students there. On his meeting with Prime Minister Pashinyan, he tweeted: “Thank PM @NikolPashinyan of Armenia for receiving me today. Discussed a roadmap to take our bilateral cooperation forward. “Agreed on enhancing our trade, education and cultural exchanges. Recognised our shared interests in strengthening connectivity, including the International North South Transport corridor.

“Briefed each other on our respective regional developments. India supports the OSCE Minsk process,” he tweeted, in reference to the Organization for Security and Cooperation in Europe’s (OSCE) Minsk Group that support efforts to find a peaceful solution to the Nagorno-Karabakh conflict. “Will cooperate closely in international organisations and multilateral forums.” He also went to the National Gallery of Armenia where he saw replicas of the Ajanta cave paintings on canvas done by noted Armenian painter Sarkis Khachaturian. “At the Ajanta in Armenia. Paintings of the caves by noted Armenian Artist Sarkis Khachaturian at National Gallery of Armenia in Yerevan.” At the Matenadaran library, he noticed a copy of the Mahabharata in Sanskrit, and also samples of the close Armenia-India connect in the form of the first Armenian newspaper and constitution which were published in Madras.

“Also at Matenadaran library, a copy of the Mahabharata in Sanskrit. “The Armenia -India connect so visible in the Matenadaran library in Yerevan. “First Armenian newspaper and constitution that were published in Madras(Chennai),” he tweeted. On his meeting with some Indian students there, he tweeted: “Wonderful to see Indian students and Armenian friends of India in Yerevan. “Appreciate the efforts made by the Government of Armenia for the welfare of our students.” He also paid homage at the statue of Mahatma Gandhi at a park in Yerevan, and alongwith Foreign Minister Mirzoyan, planted a tree of friendship. “Paid homage to Mahatma Gandhi at his statue in Yerevan. Thank FM @AraratMirzoyan for joining me on this occasion. Together, we planted a tree of friendship.” Earlier, he paid homage at the Tsitsernakaberd Memorial Complex, Armenia’s official memorial dedicated to the victims of the Armenian genocide, built in 1967 on the hill of Tsitsernakaberd in Yerevan. “Began the day by paying homage at the Tsitsernakaberd Memorial Complex,” he tweeted. Jaishankar is here on a two-day visit – the first ever visit by an Indian foreign minister to the landlocked country in the Caucasus mountains.