■ India at UN:
‘Hopeful ASEAN will move expeditiously on Myanmar’ 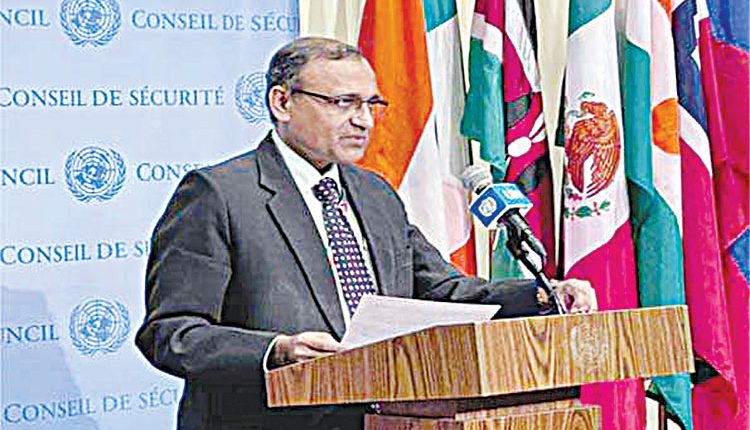 United Nations, Aug 3 (FN Bureau) India has said it is hopeful that the 10-member ASEAN bloc will move expeditiously in their initiative to act on the troubles facing Myanmar, even as it emphasized that it does not want any action by the international community that will further destabilise the neighbouring country, as it would directly affect India. Answering a question during his first media interaction after India took over the rotating presidency of the UNSC for the month of August, India’s Permanent Representative to the UN T.S. Tirumurti also termed as “completely incorrect” a comment from a media person that India is rejecting asylum seekers from Myanmar.

On the ASEAN five-point consensus and its initiative, he said that “India hopes this initiative will be expedited and that is something we will be looking forward to.” At its April 24 summit, the ASEAN bloc arrived at a five-point consensus on Myanmar, that included an immediate cessation of violence, constructive dialogue among all parties, the appointment of a special ASEAN envoy to facilitate dialogue, provision of humanitarian assistance, and a visit by the envoy to Myanmar. The foreign ministers of the Association of South East Asian Nations have named Brunei’s second foreign minister Erywan Yusof as the bloc’s special envoy to Myanmar, which has been under the military since the February 1 coup. Tirumurti said that India has extended its support to the efforts of the ASEAN, “and we really hope that the ASEAN can move expeditiously on their efforts, and also the five-point consensus. We need a constructive and also a coordinated approach” on Myanmar.

Terming Myanmar as an “extremely important neighbor for India”, he said that due to the 1,700 km of land boundary and maritime boundary, and the civilizational and historical links, “what happens in Myanmar is extremely important for us. We have a direct stake in the situation in Myanmar.” He said India’s position on Myanmar has been fairly clear and consistent. “We are deeply concerned about the developments in Myanmar. We have condemned the use of violence in Myanmar, we have urged maximum restraint, we believe that there can be no falling back on the path to democracy in Myanmar, and we call for upholding the rule of law and taking forward the democratic process, in which we have actually invested in, and we have called for the release of detained leaders.” “We have repeatedly called for engagement from their side without preconditions and for peaceful and an urgent resolution.”

“What we do not want is an action on the part of the international community which will further destabilise the country, because any instability in the country will directly affect India,” Tirumurti said. He said that it is completely incorrect to say that India is rejecting asylum seekers from Myanmar. “We have several thousands of them in India, and it is important to understand that we have four states of India which are neighbouring Myanamer, and in some of them the ethnicity is the same, for example in Mizoram, the ethnicity is the same as on the other side of Myanmar, the Chins for example,” he said. Speaking on behalf of the UNSC, he said that the members are following the situation very closely in Myanmar. “We have had consultations and meetings and the Council has expressed strong support for the ASEAN initiative and ASEAN process and the five-point consensus.” “We have to give the ASEAN initiative a fair chance, and to give ASEAN the space to take their initiative forward,” he added.

He stressed that the 1972 Simla Agreement, “which has been mentioned by the UN Secretary General himself, provides that the resolution of differences between the parties should be resolved by peaceful means and by bilateral negotiations”. “Since Pakistan has signed off on this we hope they will follow through on this and implement the provisions of the Simla Agreement,” he said. On the constitutional changes brought about on Jammu and Kashmir, he said that “these relate to the temporary provisions on J&K, including an Article 370 of the constitution. Let me mention to you that the changes have been brought through established parliamentary procedures and it is well within the framework of the Constitution of India to effect these changes. So any change or modification to Article 370 is the sole prerogative of the Republic of India.” To a question by a media person that during their meeting earlier, Prime Minister Narendra Modi had told Pakistan Prime Minister Imran Khan that poverty is the main enemy of the two countries, Tirumurti said that “India desires normal neighbourly relations with Pakistan.”

Japan to Hospitalize only serious cases as COVID-19 infections rise

Jaishankar to chair high-level briefing at UNSC on counter terrorism