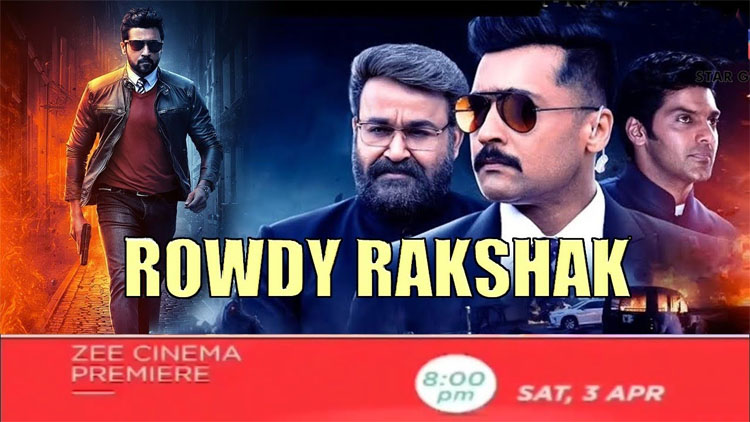 New Delhi, Apr 2 (Agency) Keeping up with the promise of bringing the experience of blockbuster movies to every home, Zee Cinema is set to showcase two superhit films, ‘Rowdy Rakshak’ and ‘Venky Mama’ that are perfect weekend entertainers. The action thriller, Rowdy Rakshak will feature an impressive line-up of stars like superstar Suriya and veteran Mohanlal in the lead role, along with Arya, Boman Irani and Sayyeshaa. Followed by the superb action-filled comedy movie Venky Mama, starring Venkatesh Daggubati and Naga Chaitanya.

Rowdy Rakshak will air on April 3 at 8 pm and Venky Mama on April 4 at 8 pm. The K.V. Anand directorial, Rowdy Rakshak, is a high-octane political action thriller that moves along the life of a special agent (Suriya) who is assigned to protect the Indian prime minister (Mohanlal), who later gets assassinated. Following this, he is tasked with finding the person responsible for the assassination. This high-octane political action thriller features an impressive line-up of stars like Suriya, Mohanlal, Arya, Boman Irani and Sayyeshaa.

“The movie will always be special for me because it was my Tamil debut movie. The South Indian Industry has, over the years, created such a loyal audience for itself, and that’s not limited to a particular language. And this is what I find the most exciting. For me, it’s the craft that is the most important and there’s no way to learn and grow if you don’t keep experimenting. It is not a conventional action drama but it is a story that raises the right questions and introduces a novel style of storytelling,” said Boman Irani. The next offering from the channel is Venky Mama. The real-life uncle and nephew, Venkatesh Daggubati and Naga Chaitanya will bring life to this superb action-comedy movie. The movie, a crowd-favourite, makes us feel and flow with the story of a man who raises his nephew as his own child, fighting everything the world throws at them.

Naga Chaitanya said the film defines family bonds and love, it took me back to all the support and encouragement I’ve received from my family over the years. “Venky Mama captures elements of family, gratitude, support and love. The film was even more special for me as I was sharing screen space with my uncle Venkatesh Daggubati for the first time. The bond that we share reflects in the movie. It was a memorable experience to work on this film. If you are looking for an entertaining weekend with your friends or family then tune in to Zee Cinema on 4th April to join us on our exciting journey filled with emotions, action, and entertainment,” he said.