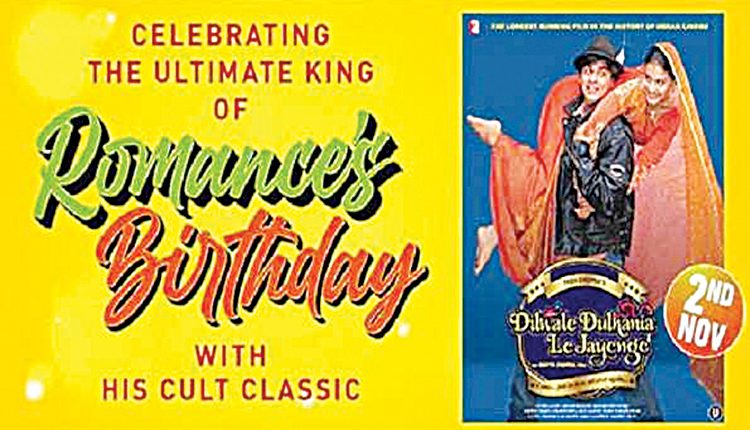 New Delhi, Nov 2 (Representative) To celebrate the 57th birthday of Shah Rukh Khan, PVR Cinemas is screening the most-loved iconic movie, ‘Dilwale Dulhania Le Jayenge’ (DDLJ), across 25 plus cinemas in 18 cities. The movie will be screened in Mumbai, Delhi NCR, Pune, Ahmedabad, Bengaluru, Chennai, Hyderabad, Kolkata and Chandigarh among others.Released on October 20, 1995, the film didn’t just shatter all records but it became the longest running film in the history of Indian cinema having a theatrical run of over 25 years. DDLJ is Yash Raj Films’ and Indian cinemas’ biggest IP. PVR shares a beautiful history with the movie as its legacy property PVR Priya in Vasant Vihar, New Delhi screened the movie for the first time in 1995.

Sanjeev Kumar Bijli, Joint Managing Director, PVR Ltd, said: “Shah Rukh Khan is one of the very few names in the Hindi film industry, who has become synonymous with the genre of romance. PVR Cinemas is delighted to screen this iconic movie as a fine ode to the star and a treat for his fans. “PVR always strives to provide movie buffs with experiences and with this initiative our aim is to deliver an electrifying experience to all the SRK fans across India. We invite our patrons to watch King Khan in his most memorable role, not on their phones or laptops, but the way it is meant to be watched – on the big screen.” SRK shared: “DDLJ has been an extremely special film for me.

I am grateful for all the love I have been receiving over the years for the film. Bringing it back on my birthday just makes it more special. Thank you!”Rohan Malhotra, Vice President – Distribution, Yash Raj Films, added: “DDLJ is the longest running film in the history of Indian cinema which has shaped pop culture as we know today. It is our biggest IP and it is symbolic to the deep bond that Shah Rukh Khan & Aditya Chopra’s YRF share. “While the film continues its theatrical run in Mumbai till date, YRF is screening DDLJ across multiple PVR locations to mark SRK’s birthday this year. SRK is an icon who has graced Indian cinema with path-breaking films and it is our honour to celebrate his birthday and treat his fans to one of his most memorable films of his incredibly successful career.”