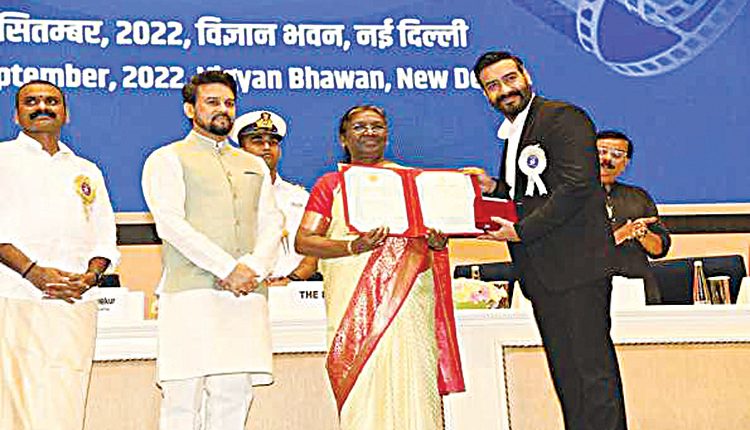 New Delhi, Sep 30 (Agency) President Droupadi Murmu on Friday conferred National Film Awards (NFA) for the year 2020 under various categories at 68th edition of the ceremony, here. The prestigious Dadasaheb Phalke Award was conferred to veteran actress Asha Parekh on the occasion, in presence of Union Minister for Information & Broadcasting Anurag Singh Thakur and other dignitaries. ‘Testimony of Ana’ was conferred the award for Best Non-Feature Film, while ‘Soorarai Pottru’ was awarded the Best Feature Film. Suriya for ‘Soorarai Pottru’ and Ajay Devgn for ‘Tanhaji: The Unsung Warrior’, jointly received the Best Actor Award, while Aparrna Balamurali was conferred the award for Best Actress. ‘Tanhaji: The Unsung Warrior’ received the Award for Best Popular Film Providing Wholesome Entertainment. In her address, the President congratulated Dadasaheb Phalke Awardee Asha Parekh for her special contribution to the world of cinema, and said that this award to her is a recognition of women empowerment. “Films have the widest impact among all the art forms.

Films are not just an industry but also a medium for an artistic expression of our value system. Cinema is an effective tool for nation building as well,” she said. Murmu said that as the nation celebrates Azadi Ka Amrit Mahotsav, feature and non-feature films related to the life stories of freedom fighters, known and unknown, will be welcomed by Indian audience. The audience desires production of such films which bolster unity in the society, accelerate the pace of development of the nation and strengthen the efforts of environmental protection. Highlighting the recognition enjoyed by Indian music abroad, the President said that has been a great medium for spreading India’s soft-power globally. She further remarked that In July this year, a meeting of foreign ministers of the member countries of Shanghai Co-operation Organization was held in Uzbekistan where a popular song from a 1960s Hindi film was performed by a foreign band at the closing ceremony. Adding further, she said that to make a more effective use of this soft-power, we must enhance the quality of our movies. “Now in our country movies made in one region are becoming very popular in all other regions as well. In this way Indian cinema is tying all the countrymen in a cultural thread.

This film community has a huge contribution to the Indian society”, she said. Speaking on the occasion , Thakur said that he holds a strong belief that cinema is poetry in pictures mirroring the magic, marvel and madness of all that which makes us feel alive and human. “Cinema has captured and carved the conscience, community and culture of our country. Debutants, professionals and legends from the Indian Film Industry have tickled and touched our hearts and minds for over a century,” he said. Highlighting the role played by OTT platforms during the COVID-19 pandemic, the Minister said that today cinema has crossed the boundaries of theatre and reached the comforts of our homes and mobile phones with the advent of OTT. The Minister credited the film stars of India for their contribution during the pandemic and said that in the midst of the grim reality of Covid and fragile global macroeconomic conditions, the manoranjan and messaging provided by you was our only beacon of hope. He also commended the state government of Madhya Pradesh for winning the ‘Most Film Friendly State Award’ for the second time in five years. The Minister invited the award winners to guide the future creators of movie magic being selected through 75 Creative Minds of Tomorrow and said that their support of this unique initiative of motivating and mentoring youngster will shape the next generation of award winners.

“India is a country of linguistic diversity and there is no better display of this diversity than the National Film Awards,” Thakur said. Speaking of the talented winners from all over the country, he said that yet again the awards have brought out the regional strength of the country and reminded us how Indian cinema is brimming and blossoming with brilliance and talent. “Films like Kachichinithu in language Karbi, Testimony of Ana in Dangi, and Semkhor in Dimasa are extraordinary displays of our linguistic wealth,” he further added. Thakur expressed his immense happiness for four child actors getting the Best Child Artist Award and also made a special mention of Divyesh Indulkar, a divyang boy and one of the awardees. Expressing his delight that the Best Female Playback Singer Awardee, Nanjiyamma was a folk singer, the Minister said she hails from a small tribal community in Kerala with no professional film background and this shows the power of our storytelling and talent.