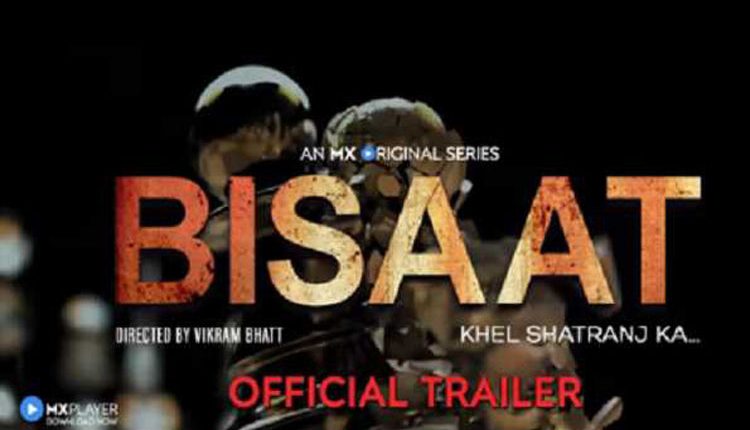 New Delhi, Apr 9 (Agency) Unanticipated twists, lingering mysteries and an edge of the seat suspense – veteran director Vikram Bhatt has mastered the art of bringing alive crafty whodunits that leave you deducing who the killer is. His visions never disappoint, and the maestro is back with MX Original Series ‘Bisaat’, bringing viewers a riveting murder mystery headlined by Sandeepa Dhar and Omkar Kapoor. All episodes will stream for free on MX Player, starting April 15.

Exploring dangerous secrets, the 8 episodic series traces the life of Dr. Kiyana Verma (Sandeepa Dhar), a psychiatrist who always goes the extra mile to resolve her patient’s issues. She finds herself consulting on a new case of a woman called Radhika Kapoor (Leena Jumani) who complains of an abusive relationship with her husband and business tycoon, Yash Kapoor (Khalid Siddiqui). As is Kiyana’s need to help her patients beyond the four walls of the clinic, she begins to dig deeper into Yash’s life despite the hospital and her husband, Dr Abhijit Joshi’s (Omkar Kapoor) advice against it. Not long after, Yash Kapoor is found brutally murdered at his beach house and all fingers are pointed towards Dr. Kiyana Verma. What follows next are revelations, blackmail and a thrilling chase to find out who murdered Yash Kapoor. A pawn, a target or the culprit – what is Dr Kiyana’s ultimate truth?

Talking about this series, Vikram Bhatt says, “Thriller, as a genre, has always captivated me as a viewer which is why I often tend to portray that on screen. As a storyteller, I enjoy cranking the tension up to its maximum and have audiences engrossed in the journey of my characters. Bisaat is a tricky game that involves exposés, high stakes and emotional wreckage that promises to have you expecting the unexpected. The cast has done a fabulous job and I hope to work with each of them again.”

“How can one say no to working with Vikram sir? His style of storytelling has so much panache and his narratives spin a twisted web of lies, deceit, and desperation that really shines on screen. This role required a lot of preparation and for someone who is always charged and ready to go, I had to imbibe a sense of acute calmness for Dr Kiyana’s role. I worked on my demeanor for a month before we started shoot and it’s been a great learning curve,” Sandeepa Dhar said.

Omkar Kapoor says, “This series is surely very special for me. Firstly, for its script and secondly, having gotten the chance to work with Vikram Bhatt, who is a fantastic narrator and director. He’s known for bringing the best out in his actors and I am so happy to be a part of this project.” The series also stars Jia Mustafa, Coral Bhamra, Ashmita Bakshi, Trishaan Maini, Tanvi Thakkar in pivotal roles.