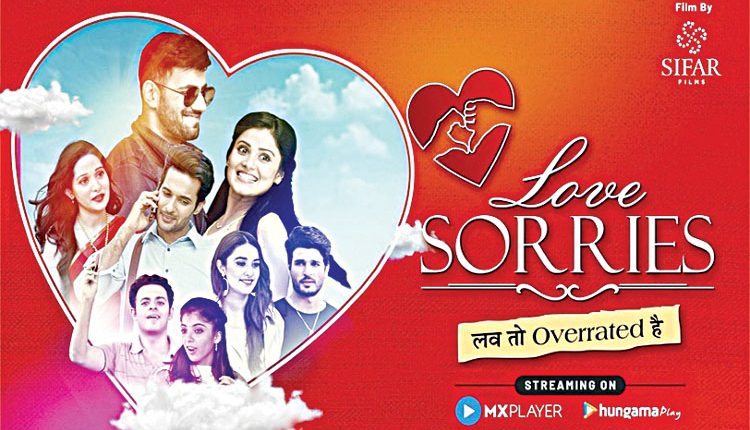 Mumbai, June 10 (FN Agency) Sifar films has a recent OTT release of its anthology film “Love Sorries”, premiered on 20 OTT platforms including MX Player & Hungama Play. The makers of the movie have contrasted the current edge of OTT content space bloated by suspense, thrillers, biographic zone by migrating with a fresh concept of Love Sorries. The audience panel has welcomed the movie with great reviews in HSM & scored a 9 rating on IMDb. The producer of the anthology, Mr. Piyush Choudhary expressed, when the content you deliver is of the finest quality & new for the audience, Word of Mouth becomes our authentic source of manifestation & success.

The movie “Love Sorries” acts as a mirror reflection of love in today’s society & puts forth the idea of exaggerated love emotion perceived by today’s generation. Gautam Joshi, the director of the film, has ventured as a risk-taker debutant, contrasting the age-old tradition of fairytale love stories in Indian cinemas. Movie’s response after the release clearly specifies that the risk has endeavored in every way. The gripping titles of this anthology are labeled after food items. Every story is curiosity-driven, with an unexpected climax steered by twists & turns that keep you hooked. The first story is “Strawberry’, a grand set-up of an extra-marital affair. While the first story seems a bit sluggish in parts, it’s the subsequent stories that have made up and are really well-paced. The stories’ context & momentum keeps you excited till the last story Kesar-Pista & by its shocking closure.

The music album of Love Sorries is an OST that does not have any remix songs. The music composer Mr. Himanshu Joshi has done a brilliant job in gracing the movie with musical elegance. Romantic compositions like ‘Pighla De Mujhe’, ‘Ankahi Ansun Ho tum’ will keep you drooling with mystical vibes whereas the title track ‘Love Toh Overrated Hai’ works as a love anthem for today’s generation. The other catch of the climax in every movie is the interconnection of stories kindled by a rewind effect & distinctive clarity. Love Sorries definitely has established a long-lasting impression with its never-before-seen content across OTT platforms.

About the SIFAR FILMS
Sifar films is an illustrious production house name in Central India for over 2 decades. In the field of advertising, Sifar films has more than 200 successful TV commercials under its belt. It has produced & launched campaigns for prestigious brands like Airtel, Kirloskar, Mahakosh Oils, State Bank of Indore, including many leading political parties. Sifar films also has their length of work shared as short film production. Its movie ‘Fall in Line’ has received 5 International Awards, & has participated in many film festival. Today, Sifar Films is a leading name in the advertising sphere, & is all set to foray in main stream cinema and Entertainment Content Development.

China, US hold talk on trade and investment