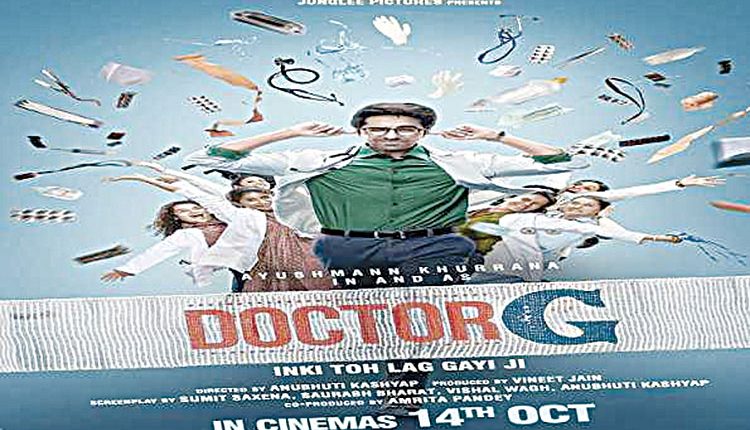 New Delhi, Oct 13 (FN Agency) Ayushmann Khurrana, Rakul Preet Singh, and Shefali Shah starrer ‘Doctor G’ has been creating headlines and noise, for the right reasons since the launch of its trailer. Audience has lapped up the content that they have seen in the trailer and in response are looking forward to watching the film. This Ayushmann starrer gives the feel of him being back to his genre of cinema which is now called the Ayushmann Khurrana genre amongst the audience.Post Pandemic there has been very low turnout at the box office with many big-ticket films failing to even get an opening or advance in theatres.

‘Doctor G’, which is a mid-sized film, getting this kind of advance bookings is a breath of fresh air and definitely encouraging in the industry. The advance booking was opened in limited screens at national multiplexes which has only been a trend for big event films post the pandemic. Despite being a youth targeted and an A certified film, the current number for advance bookings is encouraging and a positive step towards a steady growth to have a good first day collection in the box-office. Exhibition sector is optimistic that ‘Doctor G’ will open well at the box office on day one, as the advance bookings have doubled as of this morning and is only set to grow from here. Kamal Gianchandani, CEO PVR Pictures shared.

“We have seen audiences enjoy themselves tremendously and laugh out loud during the trailer playouts in theatres and there is a certain affinity towards an Ayushmann Khurrana film. Looking at how the advance bookings have opened up with decent numbers, as compared to other mid-budget films, we are hopeful that he is back with a bang, paving way for other such high-concept films as well.” Devang Sampat, CEO Cinepolis, said, “We have received tremendous response from Doctor G trailer and hope that this film would change the fate of mid-size film, which has been impacted in recent covid times. The advance booking numbers that we are seeing currently has been a positive step towards that direction”Directed by Anubhuti Kashyap and Written by Sumit Saxena, Saurabh Bharat, Vishal Wagh and Anubhuti Kashyap, ‘Doctor G’ is set to release in theatres on October 14.