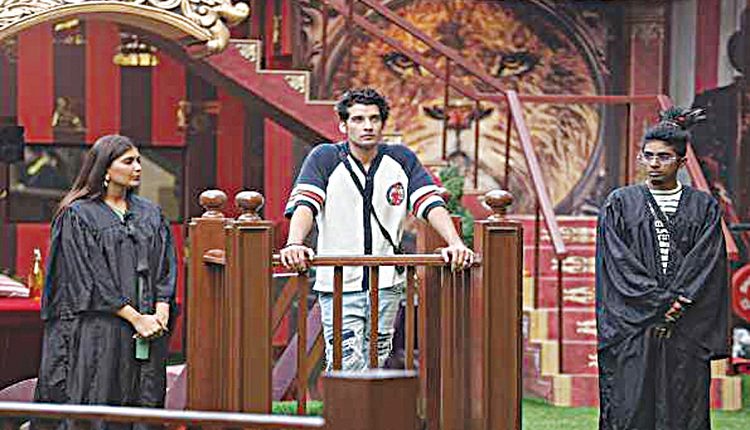 New Delhi, Nov 3 (Representative) Entertainment is at its peak in ‘Bigg Boss 16’ tonight’s episode as it has everything – from courtroom drama to captaincy termination, romantic confessions to lovers’ tiff, cannot ask for more. A shock wave hits Gautam Singh Vig when ‘Bigg Boss’ fires him from the captaincy for being incompetent.During his captaincy tenure, Gautam had neglected the house and his duties, instead he only focussed on Soundarya and ignored the fact that she broke one of Bigg Boss’ cardinal rules – do not speak in English. This decision results in the ‘no ration’ rule being lifted, but it seems that nothing comes easy for the contestants of this game-changing season. To earn the ration, the housemates must perform a task titled ‘MC Stan v/s Nimrit’ in a courtroom set-up. With love being in the air in the coveted house, the question of its sincerity has always been debatable.

To clear doubts once and for all, the master of the house brings a court to decide on it. The matter is whether Gautam’s relationship with Soundarya is for the camera or for real. Gautam is accused with the charge of faking a relationship with Soundarya to strengthen his game on the show. While MC Stan is appointed as his defender, Nimrit Kaur Ahluwalia is the prosecutor. The prosecution and defence must convince the housemates to support their respective claims and the verdict will be passed by judges Ankit Gupta and Gori Nagori.It will be interesting and super entertaining to watch the outcome of this unique proceeding and what special power is offered to the winning party. Apart from questioning his love, this court will also put Gautam’s friendship with Shalin to trial in another matter.

It looks like along with Gautam even Soundarya is not spared from getting into the ‘Katghara’ as ‘Bigg Boss’ pronounces her guilty of speaking in English and violating the rules of the house by removing her mic and whispering in Gautam’s ear. The master of the house sentences an interesting punishment to the convicted Soundarya, and it leaves everyone in splits. The season of love and break-up commences in ‘Bigg Boss 16’ in the house. After a month of dilly-dallying and building chemistry Shalin and Tina finally confess their feelings for each other. While their love story blossoms, another other one suffers a blow. Priyanka Chahar Choudhary and Ankit Gupta discuss one of their previous argument which quickly escalates into a fight leading to a massive fallout. After a series of hurtful things being said, will the two reunite? ‘Bigg Boss 16’ airs Monday to Friday at 10 PM and Saturday – Sunday at 9.30 PM on COLORS and Voot.